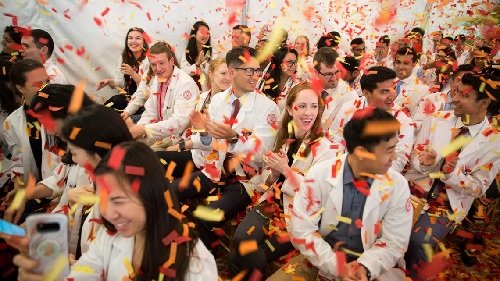 After years in which Doctors without Borders worked to change the world, a new movement one might call doctors without debt is catching on.

At least one cost in health care isn’t going up at some institutions – medical school tuition. Some medical schools, led by a movement started by Long Island native Kenneth Langone, are going tuition free – in what may be the biggest change in medical school education in history.

After medical student debt grew to the point where many new doctors started their careers deeply in debt, medical schools around the nation are using big donations and other means to provide free tuition to many and sometimes all students.

These follow years in which donations were often used to build infrastructure named for donors and individual scholarships. But the lsome new programs provide scholarships to large numbers of medical students, seeking to make a medical degree more affordable.

“Our hope—and expectation—is that by making medical school accessible to a broader range of applicants, we will be a catalyst for transforming medical education nationwide,” Kenneth Langone, chair of the Board of Trustees of NYU Langone Health, said after NYU announced free tuition.

NYU then announced free tuition at the newly created NYU Long Island School of Medicine in Mineola, where primary care physicians are being trained. And some other schools are following suit – at least in part. 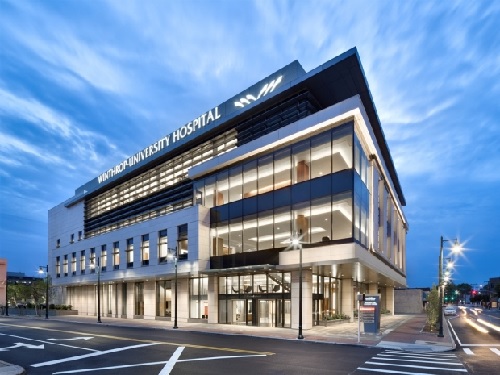 “It will enable us to develop a new generation of medical leaders in primary care, an area of medicine where there is a pressing need,” Andrew Hamilton, president of New York University, said of the school in Mineola that accepted 24 students for its first class in the summer of 2019, with additional slots opening up in subsequent years, eventually accommodating 40 students in each of its three classes.

Leader of the Tuition-Free Trend

Kenneth Langone, most famous for helping finance the creation of The Home Depot, was born in Roslyn Heights, He attended Bucknell University and the New York University Stern School of Business and has since become a leader in the tuition-free medical school movement.

While NYU Langone is leading the pack, the landscape of medical schools has been changing drastically amid major announcements – and standing ovations as medical students find out their school is making tuition free for many and sometimes all students.

Just as Langone made a difference, Sanford Weill soon joined the movement to lower and sometimes eliminate medical school tuition.

The Kaiser Permanente School of Medicine, a nonprofit medical school in Pasadena, Calif., said it won’t charge tuition for the school's first five classes of students. The inaugural class of 48 will start in the summer of 2020.

Thanks to a $3 million gift from an anonymous donor, the University of Houston’s College of Medicine first class, including 30 medical students, won’t have to pay tuition when the school opens in the fall of 2020.

"Student debt is the number one deterrent for students when applying to medical school," Renu Khator, president of the University of Houston, said. "This generous gift will allow such students an opportunity to attend and ultimately lead the future medical workforce."

Weill Cornell said it received grants totaling $160 million to “ensure that the best and brightest aspiring doctors have the financial support and freedom to seek careers in medicine,” according to the school.

“By replacing student loans with scholarships that cover tuition, housing and other living expenses, the program ensures that all students, including those from economically diverse backgrounds, can pursue their medical education without financial burden,” according to a statement by the school. “This program empowers students to ultimately focus their careers on their interests and talents, rather than the requisite future salaries to repay their loans.”

Dr. Augustine Choi, the Stephen and Suzanne Weiss Dean of Weill Cornell Medicine and provost for medical affairs at Cornell University, said this would help “change the future of medical education.”

“Providing debt-free medical education isn’t just what’s right for our students; it is critical to creating the best doctors for all generations to come,” said Sanford Weill, chairman emeritus of Weill Cornell Medicine’s board.  “We are proud to be champions of our students at one of the most pivotal times of their lives.”

Providing medical school tuition-free isn't cheap - although it is generating a surge in philanthropy. Washington University in St. Louis  plans to spend $100 million so more than half of new students will not pay tuition, which is currently about $65,000, based on financial need as well as academic merit.

The move comes at a time when medical student debt has become onerous: According to the Association of American Medical Colleges, 75 percent of doctors in the nation graduated with debt in 2017.

The median cost of medical school tuition and fees for private medical schools was $59,605 and the median current debt of a graduating student was $202,000. About 21 percent of doctors graduating from a private school do so with more than $300,000 of educational debt.

“A population as diverse as ours is best served by doctors from all walks of life, we believe, and aspiring physicians and surgeons should not be prevented from pursuing a career in medicine because of the prospect of overwhelming financial debt,” said Dr. Robert Grossman , the Saul J. Farber Dean of NYU School of Medicine and CEO of NYU Langone Health. 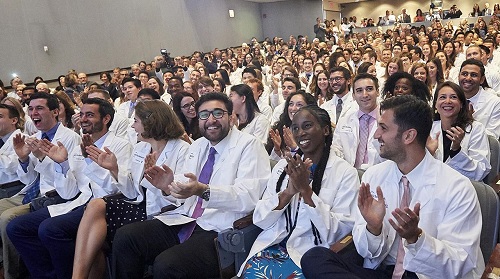 NYU Langone in 2013 began offering an accelerated three-year curriculum that the school earlier said would allow “physicians to get into the field of their choice earlier, during their most productive years, and with less debt.”

There are, if not necessarily strings attached, standards that go along with the funding and free tuition.

Even free tuition doesn’t mean no expenses, since students would still be responsible for housing, food and other costs.