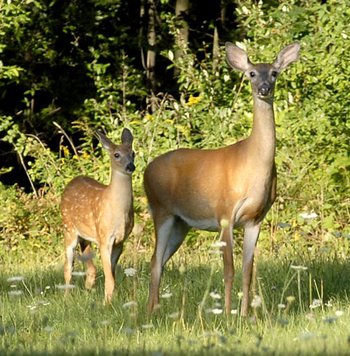 Albany, NY - September 29, 2015 - The New York State Department of Environmental Conservation (DEC) and the New York State Department of Motor Vehicles (DMV) today urged motorists to be alert for moose, deer, and other wildlife on the roads. Early fall is the peak time for wildlife activity in northern New York. Additionally, two-thirds of all deer and vehicle collisions occur during October, November, and December, when deer breed and travel the most.

More than 25,500 motor vehicle crashes in 2013 involved collisions with deer. In three counties - Erie, Monroe, and Orange - the number of crashes exceeded 1,000. Several dozen of such crashes occurred in New York City, demonstrating that no area of New York State is immune to collisions with wildlife.

"Any collision can endanger drivers, their passengers, and even pedestrians, but motorists should be especially aware of deer, moose, and other animals, during this time of year, as they can be dangerous and unpredictable," said DMV Executive Deputy Commissioner Terri Egan. "I urge every motorist, even those in urban areas, to keep an eye out and be aware that animals can cross their paths at any time."

Moose and deer are most active at dawn and dusk, which are times of poor visibility and usually when there are more motorists on the roads. When struck, the animals usually have a serious impact on the windshield of a car or pickup truck, not just the front of the vehicle. Moose are much larger and taller than deer, so their bodies cause greater damage to vehicles, increasing the likelihood of injuries or even deaths. They are especially difficult to see at night because of their dark brown to black coloring.

Brake firmly but do not swerve if encountering moose or deer. Swerving can cause a collision with another vehicle, a tree, a pole, or other objects. If a deer or bear is hit and killed by a motor vehicle, the owner or consignee can request a possession tag from the investigative police officer to legally possess the carcass.

More information about moose and deer can be found on DEC's website. Additionally, precautions and safety tips about special driving conditions, such as driving in rain, in winter, or in driving emergencies, can be found on DMV's website.