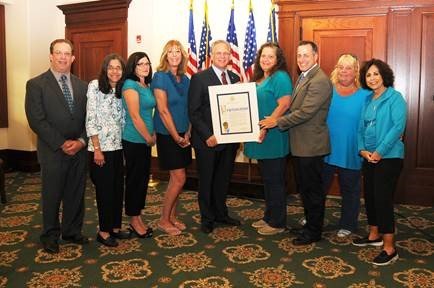 “Today, we illuminate the dome of this building teal in honor of Ovarian Cancer Awareness Month,” remarked County Executive Mangano. “We are here to commemorate the thousands of women whose lives have been lost to this disease and to acknowledge all of the survivors and their families who have been greatly affected by ovarian cancer. More than 20,000 women in the United States are diagnosed with ovarian cancer each year. Until we have a cure, our best weapons include knowing the symptoms, early detection, and timely treatment.”

TEAL was carefully chosen by the National Ovarian Cancer Coalition as it stands for their motto to “Take Early Action and Live.” Statistics indicate that 60% of women when diagnosed with ovarian cancer are already in stage three of the disease.

County Executive Mangano encourages residents to visit www.ovarian.org to learn about the signs and symptoms of ovarian cancer and the many resources available through NOCC’s Long Island Chapter.