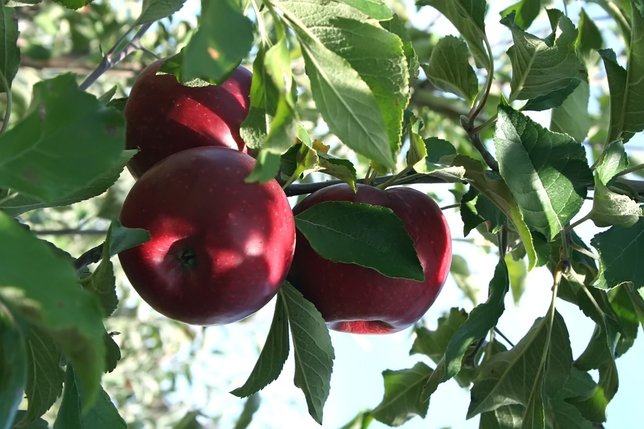 Albany, NY - September 25, 2013 - Governor Andrew M. Cuomo today encouraged New Yorkers and tourists from neighboring states to “Taste NY” apples this year at over 654 apple orchards and support New York’s important apple industry this fall. Apple growers from across the state are hailing this year’s apple crop as the best in many years following storm events that devastated many apple orchards in recent years.

“As the fall season arrives, the time has never been better to taste the variety of products from our vibrant apple industry,” Governor Cuomo said. “New York’s apple growers caught a bad break with last year’s warm spring and early frosts, but 2013 is shaping up to be one of the best years yet for the industry. So whether it’s a homemade apple pie or an apple cider donut, there is a wide selection of delicious apple products to enjoy, and I encourage New Yorkers to visit a local apple orchard this autumn.”

New York typically ranks second in the nation for apple production, behind Washington State. Last year’s crop, however, was diminished mainly by an early warm spring that was followed by several frost events that killed the apple buds. The prospects for this year’s crop look very good thus far, and the Governor is encouraging all New Yorkers and tourists to buy New York apple products, visits u-pick orchards and help further the industry’s rebound in 2013.

Earlier this year, researchers at Cornell University announced two new apple varieties that had been developed in partnership with the New York Apple Growers (NYAG). Dubbed SnapDragon and RubyFrost, the new varieties spent roughly a decade in development as well as a year-long consumer testing process before being released to the public. Both varieties will be hitting select NYAG farm stands this fall, and by 2015 are expected to be available in grocery stores across the state. More information on SnapDragon and RubyFrost can be found here.

Information on locations where New Yorkers can purchase home-grown New York State apple ciders, hard ciders and apple wines is also available at the “Taste NY” website, located at www.taste.ny.gov. Further information on New York’s apple industry and location of 654 apple orchards around the state can be obtained at the New York Apple Association’s website, located at www.nyapplecountry.com, and to find the nearest u-pick orchard, visit www.nyapplecountry.com/pick.php.

Jim Allen, President of the New York Apple Association said, “We have a vintage crop of apples this year with ideal growing conditions, making flavor, size and color at optimum quality levels. New Yorkers and visitors are going to love this year’s homegrown, locally harvested crop. We also anticipate an outstanding cider season thanks in part to the extra sweetness in this year’s apples. I thank Governor Cuomo for his continued support of New York apples.”

Dean Norton, President of New York Farm Bureau said, “Nothing can beat biting into a fresh apple, right off the tree on a beautiful fall day. This year is an exceptional one on our many orchards throughout the state. The apples are abundant, and New York Farm Bureau appreciates the Governor's continued spotlight that he is shining on New York agriculture. We hope everyone will head out to a local orchard near them. Supporting your local farmer is good for your community and your family’s dinner table.”

While apples are grown throughout the state, three general areas produce most of New York’s apples: along the southern Lake Ontario shore, along the Hudson Valley, and along the upper Lake Champlain Valley.