EPA to Partner with County on Contaminated Parcels in Islip, Babylon. 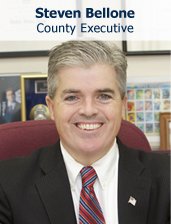 Under the TBA program, the EPA partners with municipalities to assess potentially contaminated parcels in local communities. TBAs are conducted by an EPA contractor and may include a background and historical site inspection, sampling activities to identify potential contaminants and the areas of contamination, and a determination of future investigation and cleanup options relative to future uses and redevelopment plans.  The cost of each of these assessments is approximately $100,000 each.

“This partnership allows us to take an important first step to redevelop abandoned and polluted brownfield properties that are blights on our local communities,” said County Executive Bellone. “We will continue to explore both private and public opportunities to clean-up and remediate dilapidated properties in our neighborhoods and the Land Bank will form the backbone of these efforts.”

The four sites chosen for the TBA program are:

In support of the SCLBC, Suffolk County also announced its intention today to apply for $1,225,000 from the New York State Attorney General Land Bank Community Revitalization (GCLR) fund. New York State Attorney General Eric Schneiderman announced the creation of the GLCR fund on June 26, 2013. The $20 million fund was created from the $2 billion National Mortgage Settlement. If approved for funding, the SCLBC hopes to increase the number of environmental assessments sites begun with EPA cooperation under the TBA program and to facilitate efforts to transfer ownership of specific sites to the land bank.

“This funding will allow us to address environmental concerns and redevelop these properties to come back on the tax rolls and benefit the surrounding communities” said Majority Leader DuWayne Gregory, a member of the Land Bank Board.

Legislator Tom Cilmi, a long-time advocate for brownfield redevelopment, said, “The County Executive and his staff, particularly Deputy County Executive Joanne Minieri, Sarah Lansdale and Tom Kelly, have been aggressively pursuing a number of funding opportunities and partnerships to assist the Suffolk County Land Bank.  We’re excited to have the support of the EPA as we begin the process of assessing and cleaning environmentally compromised, tax delinquent properties and getting them back on the tax rolls.”

“This agreement with the EPA marks an exciting opportunity to remediate properties, return them to the tax rolls, and improve communities,”  stated Joanne Mineri, Deputy County Executive and Commissioner of Suffolk County Economic Development and Planning. “We are confident that the Land Bank will prove to be instrumental in returning these properties to their full economic potential.”