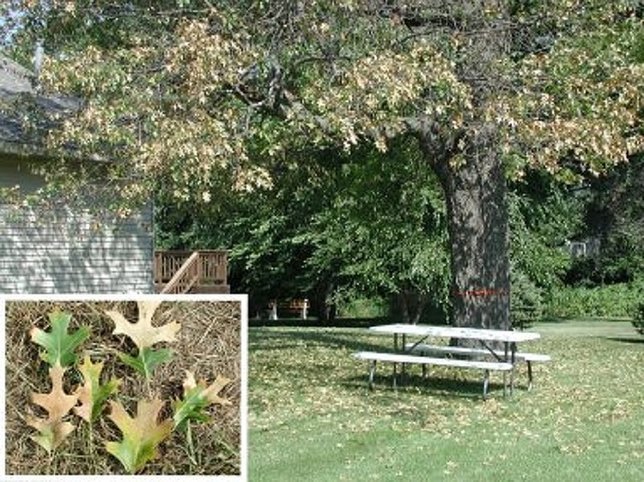 Public meeting on Monday, September 26, at 7 p.m. will be to discuss findings regarding the presence of oak wilt, a tree fungus, recently detected in Central Islip. DEC will also share its plans to suppress the oak wilt outbreak.

Central Islip, NY - September 22, 2016 - The New York State Department of Environmental Conservation (DEC) will hold a public meeting Monday, September 26, at 7 p.m., to discuss its findings regarding the presence of oak wilt, a tree fungus, recently detected in Central Islip. The meeting will be held at Central Islip Public Library, 33 Hawthorne Avenue, Central Islip. At the meeting, DEC will share the results of its survey and plans to suppress the oak wilt outbreak.

In early August 2016, DEC and the NYS Department of Agriculture and Markets announced that oak wilt had been detected in the Central Islip area of the town of Islip, Suffolk County. The disease was identified by the Cornell Plant Disease Diagnostic Clinic after samples from a symptomatic oak tree were submitted by a tree care professional.

Oak trees are one of the more common tree species on Long Island and in the Central Islip area.

Oak wilt is a serious tree disease in the eastern United States, killing thousands of oaks each year in forests, woodlots, and yards. Oak wilt is caused by a fungus, Ceratocystis fagacearum, which grows in the water-conducting vessels of host trees causing the vessels to produce gummy plugs that prevent water transport. As water movement in the tree is slowed, the leaves wilt and drop off. The infected tree eventually dies.

This is the second time that oak wilt has been confirmed in New York State. It was first discovered in Schenectady County in 2008. After samples from affected trees tested positive for the fungus, the tree care professional removed and destroyed four trees exhibiting infection. The only known treatment to contain and kill the oak wilt fungus is to remove the infected trees, as well as any surrounding host oak trees.

DEC will utilize the eradication protocols from the Schenectady County occurrence to control the Islip infestation. In August, an emergency order was issued establishing a protective zone that prohibits the removal of any living, dead, standing, cut or fallen oak trees or any portion thereof, including branches, logs, stumps or roots, green oak lumber and firewood (of any species) out of the immediate quarantine area unless it has been chipped to less than one inch in two dimensions. The order also creates a 150 foot "red oak free zone" around the specific location the infected trees were discovered. All red oak located in these zones will be removed by DEC and destroyed in order to protect the remaining oak trees in the area.

The public is encouraged to report any occurrences where an oak tree suddenly loses its leaves to the Forest Health Information Line toll-free at 1-866-640-0652. For more information about oak wilt or the emergency order, visit DEC's oak wilt information page.