With the first presidential debate just around the corner and the 2016 Presidential Election fast approaching, it can be difficult to keep political spats between friends and family civil. 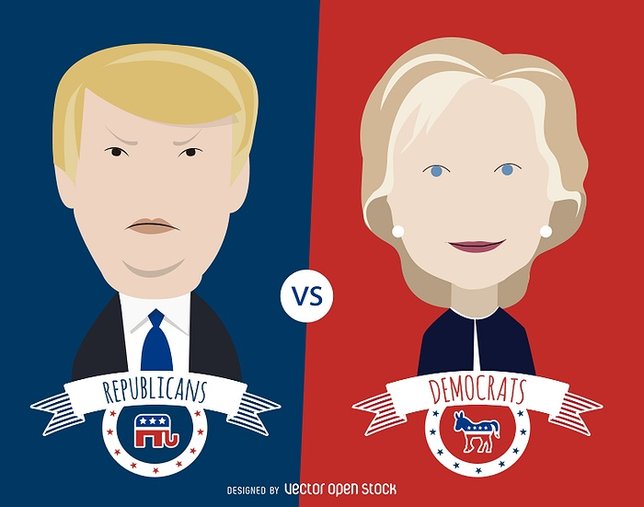 Photo by: VectorOpenStock.com via Wikimedia Commons

Election season is generally a very contentious time of year. That's doubly so during presidential elections, and this election cycle seems to have brought out an even greater degree of vitriol and division than usual. With the first presidential debate scheduled for tonight at Long Island's own Hofstra University, those tensions are liable to only intensify as we draw nearer to Election Day.

Having strong, differing opinions on a subject as significant as who will lead the country for the next four years can lead to some pretty heated conversations between acquaintances, and those arguments can be especially difficult to handle when held between close friends or spouses. As a result, experts in the field of psychology often find themselves helping people to navigate through the minefield of opposing political views within their interpersonal relationships.

Dr. Marc J. Shulman, a psychologist and couples counselor practicing in Garden City and Lawrence, maintains that while strong differing opinions can seem like a tough pill to swallow they are not inherently a negative attribute in a relationship, and that goes for opinions about politics as well as other subjects.

"Differences in a relationship are not necessarily a bad thing," says Shulman. "Each person in the relationship is an individual with their own way of viewing the world that can help to complement the other one."

This is a consistent stance for the doctor, who in a June interview with LongIsland.com  said "When two people come together in a marriage they bring two unique and distinct family cultures. Each person has a long history and background that shapes his/her beliefs and it can be quite challenging to integrate these two worlds. However, it can be achieved by understanding that your way is not the 'right' way, but it is simply the way with which you are familiar."

Shulman believes that each person is a unique individual, and keeping a certain sense of independence and wholeness as a person–whether it's a matter of differing on politics, having a unique personal style, or different tastes in entertainment–is crucial to a having healthy relationships with others.

"A person having their own identity is healthy," he says, adding that "having a 'yes man' is not a good thing."

Of course, having differing opinions is one thing; actually discussing them with loved ones and hashing out those differences is another. Such discussions can be treacherous waters to navigate, and it can be difficult to have them without any hurt feelings.

In a piece published by Psychology Today shortly after the last presidential election. Thomas J. Leeper, PhD suggests that keeping in mind that one person's opinions are just that–his or her opinions–is essential to civil discourse.

"Remember that other peoples’ opinions are not a referendum on your opinions," states Leeeper. "Disagreeing with a parent, child, in-law or anyone else does not mean that they don’t like you... Your political disagreement is secondary to your personal relationship and while political disagreements may be frustrating, they are rarely 'about you.' "

Leeper goes on to note that you cannot always change someone else's beliefs, and urges people to remember that "Political debates are about political issues, they are not (or at least should not be) about personal differences."

Dr. Shulman echoes that sentiment, noting that it is important to agree to disagree, as well as to find common ground in an argument. He also believes it critical to keep an open mind during a disagreement with a close personal relationship.

"Don’t forget that your partner’s side isn’t necessarily wrong," he says. "There are elements of truth and ambiguity in nearly any political opinion. So while discussing, if you find yourself feeling as though your partner is gravely mistaken, recognize that they may not be. It may be you that needs to come closer to their side."

While politics can be fun to discuss, Dr. Shulman argues that they are never more important than your own relationships, and if you find yourself unable to have productive political discussions with those close to you it may be best to avoid them altogether.

Still, he notes that "if disagreements between partners become contentious, that could be when therapy is needed."