Board Of Education President Advocates On Behalf Of William Floyd 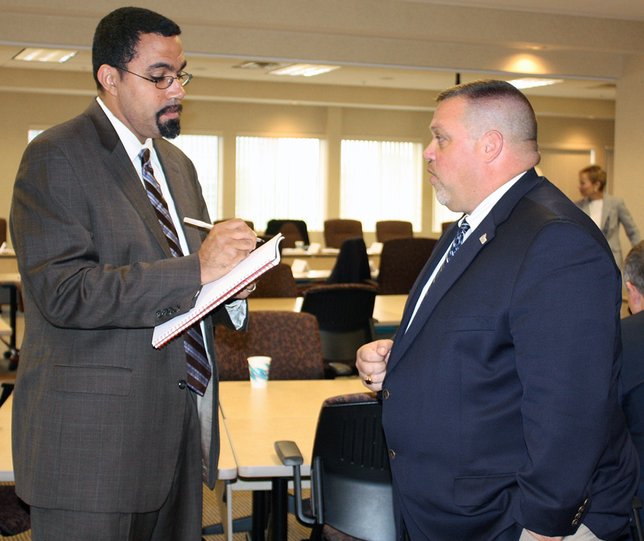 Mastic Beach, NY - September 23rd, 2013 - Robert Vecchio, President of the William Floyd Board of Education, has been participating in various state advocacy efforts on behalf of the children and families of the William Floyd School District. He recently attended a New York State School Boards Association (NYSSBA) roundtable with Dr. John B. King Jr., New York State Commissioner of Education in Albany, and testified at a New York State Senate Education Committee hearing focused on the common core standards, testing and privacy data at Suffolk Community College in Brentwood.

At the NYSSBA Roundtable with Commissioner King, Mr. Vecchio addressed Dr. King on the inequitable distribution of state aid, especially for high-needs districts like William Floyd. He also took the opportunity to ask the commissioner about the possibility of significant mandate relief and a halt to future unfunded mandates.

“It was a great opportunity to have an in-depth free flowing conversation with Commissioner King and to hear the issues from school board members throughout the state,” said Mr. Vecchio, who shared similar testimony at the Senate Education Committee’s first of four state hearings.

At the Senate hearing, Mr. Vecchio was one of two school board presidents to testify and the only one representing a high-needs school district. During his testimony, he expressed support of the conceptual goals and intentions of the common core but took exception to its rushed implementation.

“The problem has been with the practical application and implementation schedule,” Mr. Vecchio said. “Common core seemed to be fast-tracked and severely lacked the proper resources and guidance to be implemented properly. It seems that the State was more interested in doing it first than doing it right.” Click here to read Mr. Vecchio’s entire testimony.

William Floyd’s advocacy efforts continue to be strategic and multi-faceted with Paul Casciano, Superintendent of Schools, serving on the Board of Directors of REFIT (Reform Educational Financing Inequities Today), a consortium of school districts that have joined together to advocate for their equitable share of state education aid; and the district’s monthly State Aid Advocacy Subcommittee meeting where district officials, Board members, educators, parents and community members gather to discuss the best ways to influence a more equitable distribution of state aid for William Floyd.