Illegal crab pots were seized in Moriches Bay on September 8 by ECOs. 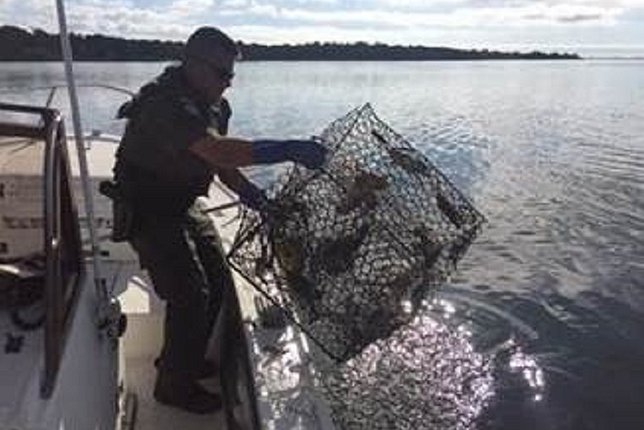 Moriches Bay, NY - September 22, 2016 - On September 8, ECOs Timothy Fay, Mark Simmons, and Chris Amato were on a boat patrol in the Forge River part of Moriches Bay when they conducted an inspection of blue claw crab pots for compliance of DEC regulations.

A total of 42 pots were checked. The ECOs found that every pot lacked a legal escape vent. The escape vents ensure that in the event the pot becomes lost, they do not become "ghost pots" and continue to keep catching and killing crabs and other species of fish and crustacean for years. In addition to the escape vents, more than half of the pots had other violations, including failing to mark the pot or buoy with the required permit number.

The illegal pots were pulled and seized with assistance from Lt. Tom Gadomski and ECOs Kaitlin Grady, Landon Simmons, and Emma Carpenter.

The commercial crabber responsible is due to report in court next month for charges of 42 counts of no escape panels on crab pots and 27 counts of failure to mark crab pots with permit numbers.