A Record Unlike Anything Else - Legendary Singer Meat Loaf Discusses His Past and Future with LongIsland.com

The multi-platinum recording artist and actor sat down to discuss his rich history and upcoming album with LonIsland.com before his November tour. 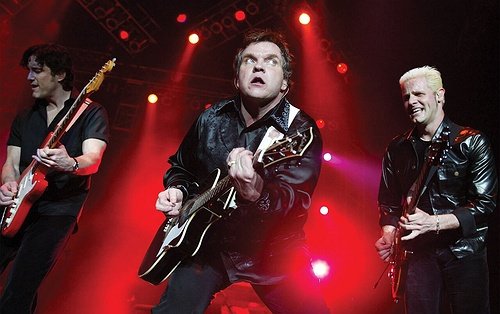 Over the course of the past four decades, a man with an unlikely pseudonym has become a legend of both Rock n' Roll and stage. Michael Lee Aday, better known as Meat Loaf, is the voice behind five platinum albums, including the seminal Bat out of Hell which was originally released in 1977. Meat Loaf also famously played the role of Eddie in the cult classic, The Rocky Horror Picture Show, and has since gone on to act in dozens of other films and shows.

The iconic performer is now hard at work, recording a brand new album with a star-studded band of musicians, and making preparations for his next tour which includes a visit to the NYCB Theatre at Westbury on November 11th. Meat Loaf recently took a reprieve from his busy recording schedule to speak with LongIsland.com's own Christian Abbatecola about the new record and his upcoming tour.

Christian Abbatecola: Hello, thank you for taking the time to talk with LongIsland.com today. You’re going to coming to Westbury in November as part of your upcoming tour, and you also have a brand new album titled Braver Than We Are coming out soon. Can fans expect to hear some songs from the new record at the show?

Meat Loaf: No, not on this tour. The album was delayed a year because I had major back surgery last October, then I had four outpatient surgeries, so we haven’t played in two years. The last time we played we did a nine month run in Vegas, and then we left there to do the record and I just started falling all the time. And so I was in the hospital for eighteen days with this back surgery, and then four months of rehab, so we’re just getting the band together and playing.

No, I’m not giving anything away with this record. This record is very different than anything else I have done or that is out there. We will do a summer tour that will be for this record.

CA: I’m sorry to hear about the back surgery. I hope things are at least progressing well with recovering from that.

CA: I’m glad to hear that…I’m very interested in what you said the album being different from anything else that’s been recorded, though. You’ve covered a lot of ground and a lot styles over the years.

ML: Nothing like this, nothing like this. Even to the point to where, always before there would be different characters but I would be in the same register, in the same voice. I change register, I change voices; there’s one particular thing that’s only 90 seconds long, but the guy’s in so much pain and being so tortured by life that that’s how I sing it, and it makes you feel that way.

It’s just very different, and it’s a lot of Jim Steinman stuff where he got other songs from—he stole from himself and made other songs. So most of the album is all Jim Steinman, and he’s been working with us on it.

CA: Steinman is, of course, the songwriter who worked with you on most of the Bat Out of Hell trilogy, and we’re coming up on about 40 years since the first Bat Out of Hell—

CA: Oh yes, I’m sorry, I got a little ahead of myself there.

ML: No, there is one other song that the record company really liked and that we liked. This record is very thematic, much more than even Tommy would be. In Tommy they brought in different people to do different things, but I just change my voice to add to the characters.

CA: Well it sounds very exciting; I can’t wait ‘til this comes out.

ML: Well you’ll either hear the first song and throw it against the wall and not want to hear anything else, or you’ll want to keep going and go “oh my God, what are they doing!?” That’s where it’s the same as anything else I’ve ever done, people either love it or they hate it, and that’s what I like. And that’s how they deal with me—they either love me or they hate me—there’s nothing worse than “eh, he’s okay.”

CA: At the very least you’ve got passion from one side or the other.

CA: So you mentioned that you’re going to be singing in a lot of different registers and voices for the album. You’ve also done a lot of famous duets throughout your career; will there be other singers on the album for a few songs as well?

CA: Scott Ian [from Anthrax] is now your son in law, correct?

ML: Yeah, about time I had him play.

CA: This album definitely sounds very exciting from everything you’re saying. You’ve got a lot of outside talent coming in, and the way you’re describing it, it sounds like it will be one of the most interesting things we’ve heard in a long time.

ML: Well it’s definitely interesting, I’ll tell you that. The record company heard all but one song yesterday, and couldn’t believe what they were listening to, which made us all very happy. ‘Cause there’s really nothing else out there like it. The closest you could come would [be] going back to the 70’s with some Queen records.

CA: But this wouldn’t exactly be the first time you’ve broken new ground. When Bat out of Hell came out it was ostensibly a Rock n’ Roll record, but you also brought a novel, highly theatrical quality to it, which I don’t think a lot of music at the time incorporated.

ML: No and everybody hated it. There was only a couple of people—Scott Muni from NEW, which was a station in New York, and a guy by the name of Kid Leo on MMS in Cleveland—when it came out they were the only two people that would actually play the record. And then it slowly grew, and I almost killed myself making it happen.

CA: Was it difficult to find a record company to publish it?

ML: Oh, it was impossible. If it wasn’t for Little Steven from the E Street Band I don’t think the record would have ever come out.

CA: How was involved with getting it published?

ML: He told the guy who left, the head of A&R at Epic, that You Took the Words was the best 15 second beginning that he ever heard in the history of Rock n’ Roll.

ML: Yeah, I don’t know if somebody paid him to say that or not.

CA: Well it’s a good thing he pushed for it, because it helped expose you to a very large audience. The album, I can’t remember the exact number, but I know it went on to go platinum over and over.

ML: Well it depends on what chart you look at. If you look at the New York Times and the LA Times it’s the third biggest selling record in history. If you go to Wikipedia, it’s the fifth. So it’s somewhere between five and one.

CA: Either way, being anywhere in the top 5 is certainly saying a lot.

ML: Yeah, but no one will ever touch the top 20 again.

CA: In this climate I couldn’t disagree. Records don’t exactly sell like they used to anymore. Shifting gears a little, I’d like to touch on Rocky Horror. That is coming up on its 40th anniversary; are you planning on doing anything special to celebrate that?

ML: Susan, Barry, Tim, myself, and Pat Quinn did a photo shot for Entertainment Weekly, we’ve done a few interviews.

ML: …Well to me the biggest part of my early career was actually doing Shakespeare for the New York Shakespeare Festival. That was in what, ’71, ’72, something like that. That was probably the biggest turning point, because that’s when Strasberg came to me. Oh God, I can’t even tell you all the stuff that came out of that.

CA: Since then you’ve done a whole lot—not just music, you’ve acted in a number of movies and shows.

ML: Oh, I’ve done Shakespeare, Broadway, 61 films. I’ve hosted game shows, I wanted to know what it was like to be a standup comedian so I spent a few nights as a standup comedian just to do it. The only thing I haven’t done is been in a television series—I’ve been a guest on them, but I’ve never been a regular.

CA: With all the roles you’ve done, is there any particular one that you enjoyed the most while you were doing it or looked back on and thought “wow, I gave a great performance”?

ML: Yes, it’s a movie called Focus. It was written by Arthur Miller and it’s with Bill Macy and Laura Dern. Arthur Miller was on the set and he walked by and put his hand on my shoulder and said “I really love what you’re doing with my character.” I was like a pile of mashed potatoes, that’s probably the biggest compliment I’ve ever gotten.

ML: Oh yeah, and later on the director, Bill Macy, Laura Dern, myself, and David Paymer took a picture with Arthur Miller and that is the picture that sits right on the front of my desk. Bill Macy worked incredibly well together, and he’s one hell of an actor.

CA: That’s certainly a great cast and an amazing writer behind it.

ML: Yeah, I mean he’s one of the great American writers.

CA: Absolutely. Alright, I think we have time for one more question, so I’d like to end things on a sort of local note. I understand that despite growing up in Texas you’re actually a bit of a Yankees fan, is that correct?

ML: Ah, I’ve been a Yankee fan ever since I was a kid because CBS, when I was a kid, owned the Yankees, and every Saturday was the Game of the Week, which was always the Yankees vs. somebody. And so now I’m friends with Whitey Ford, Yogi Berra*; I was friends with Phil, Roy White, Graig Nettles, it goes on and on.

I don’t know too many of the new Yankees, but Bernie Williams, I’m friends with Don Mattingly. Yeah I love the Yankees.

CA: I’m sure a lot of people here on Long Island are going to be happy to hear that (and others likely won’t be). I know you’re busy with the new album, have you had any time to watch any of the current season?

ML: No, we’ve been working so hard on this record that I don’t even know what day of the week it is. The only reason that I knew it was Sunday last week was that football was on.

CA: Well it sure sounds like there’s a ton of effort going into the new album, and I can’t wait to hear it. Once again, I’d just like to thank you for taking the time to sit down and talk with us.

ML: No problem, thank you for talking to me. My pleasure.

To find out more about Meat Loaf's upcoming show at the NYCB Theater at Westbury, click here! For all of the best upcoming concerts, events & fun happening on Long Island, be sure to check out LongIsland.com's Events Calendar!

*This interview was conducted prior to Yogi Berra's passing on the night of September 22nd. Our hearts and thoughts are with the friends and family of the late legend.