Governor Cuomo announced that the New York State Board for Historic Preservation has recommended the addition of 27 properties, resources and districts to the State and National Registers of Historic Places. 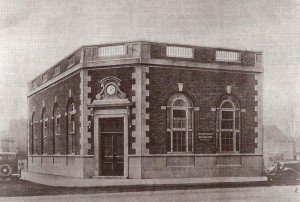 Albany, NY - September 21, 2015 - Governor Cuomo announced that the New York State Board for Historic Preservation has recommended the addition of 27 properties, resources and districts to the State and National Registers of Historic Places. The nominations reflect the remarkable breadth of New York’s history, ranging from an Oswego fort that sheltered Holocaust refugees to the nation’s first outdoor bank teller window to the only remaining historic carousel on Coney Island.

"These sites are the locations of significant moments in New York's rich history that in many cases reverberated across the nation and beyond,” Governor Cuomo said. “By placing these landmarks on the State and National Registers of Historic Places, we are honoring and preserving their legacy and giving visitors the chance to learn about this state’s vibrant history.”

“Congratulations to the owners and caretakers for this important recognition,” said Rose Harvey, Commissioner of the state Office of Parks, Recreation and Historic Preservation. “Listing these 27 places on the State and National Registers will help us to better preserve, appreciate and understand New York’s profound history.”

Tracy Memorial Village Hall, Chatham – the Neoclassical style civic building, erected 1912-13, was designed by architect and landscape designer Horace Whittier Peaslee (1884-1959), a native of Columbia County who rose to national prominence, and its construction was funded by the locally prominent Tracy family in memory of Albert E. Tracy, who died in 1910.

The Great Atlantic & Pacific Tea Company (A&P) Warehouse, Buffalo – completed in 1917, the reinforced concrete warehouse served A&P, the largest retail grocer in the United States for much of the 20th century.

Parkside Candy Shoppe and Factory, Buffalo – Built between 1925 and 1928, the store and factory complex is a good representative example of the type of independent candy store and candy manufacturer that frequently existed in American cities.

Sinclair, Rooney & Co. Building, Buffalo – constructed in 1909 for the wholesale milliner, it was designed to be flexible for the changing needs of light industrial work and later occupied by Remington Rand, Inc., sellers of office supply and technology.

Christ Church, Greenville – the 1857 church made of locally quarried red sandstone is an outstanding and remarkably intact example of Gothic Revival religious architecture.

Prospect Heights Historic District (Boundary Expansion), Brooklyn – the nomination enlarges an existing historic district to the west, east, and south and includes more than 600 residential, commercial, mixed-use and institutional buildings that reflect the larger development and identity of the neighborhood during the mid-late 19th and early-mid 20th centuries.

Greenwood Baptist Church, Brooklyn – Constructed in 1900-1901, the Gothic Revival style church played a significant role in the growth of the Baptist faith in Brooklyn from the mid-19th century to early 20th century.

B & B Carousell [sic], Brooklyn – The only remaining historic carousel on Coney Island dates to 1906 and incorporates the artistry of several masters of the flamboyant and dynamic Coney Island style carousel design.

Congregation Ahavis Achim Anshi Austria, Rochester – Now known as the Congregation B’Nai Israel synagogue, the 1928 Georgian Revival structure is significant for its association with Jewish immigrants, mostly from Austria, who settled in northeast Rochester in the early 20th century.

House at 288 Wimbledon Road, Irondequoit – The 1928 Tudor Revival home is significant in the development of Wimbledon Road (Rogers Estates Subdivision), which was planned and developed by Fred B. Tosch, who recognized the value of the model home as a marketing tool and embraced it as a new way of attracting prospective customers.

Rockville Cemetery and Bristol and Mexico Monument, Hempstead – The small settlement cemetery dating to 1799 grew into one of Near Rockaway’s primary burying grounds and holds the mass grave of 139 people, the majority of whom were Irish immigrants, who died in two shipwrecks, the Bristol (November 21, 1836) and the Mexico (January 2, 1837).

Hudson View Gardens, New York – Erected in 1923-24, the Tudor Revival apartment house complex contained many of the amenities expected in a suburban home, designed to appeal to those middle-class people who were considering a move from the city.

Fort Ontario Military Reservation, Oswego – The nomination expands and replaces an earlier National Register listing to obtain a more accurate and inclusive boundary more reflective of the fort’s military history. The new nomination also adds national significance for the fort’s history as the site of the only refugee camp in the United States for victims of the Holocaust and World War II. From 1944 to 1946, Fort Ontario was a temporary emergency refugee shelter operated by the US War Relocation Authority. The shelter helped the refugees regain their health and move forward with their lives after the horrors of war, which for many included time in concentration camps. Most of the refuges eventually became American citizens.

Shepard Family Houses, Skaneateles – The two houses belonged to prominent local businessmen and civic leaders. The house at 28 Genesee Street, originally built in 1840, was purchased and enlarged by Norman Orlando Shepard in 1898. The house at 6 Hannum Street was constructed in 1901 by the elder Shepard as a wedding present for his son, Norman Joseph Shepard.

First Reformed Church, Piermont – Built in 1946, the excellent example of Colonial Revival architecture replaced an earlier church that had served the community for nearly a hundred years when it was lost in an accidental fire.

Eli and Diadama Beecher House & Barn, Edinburg – The house was built ca. 1830 for Eli Beecher – a founding member of the community who served as supervisor on five separate occasions as well as in the New York Assembly. The house also functioned for a time as both a store and as the Beecher Hollow Post Office.

Schenectady Young Men’s Christian Association Building, Schenectady – Completed in 1928 during tremendous industrial and urban growth in Schenectady, the building is associated with the national YMCA movement that spread throughout the nation with the mission to improve the spiritual, mental, social, and physical condition of young men.
Schoharie County

Coon Family Log Cabin, Beaver Dams vicinity – modeled on similar WPA and Civilian Conservation Corps projects that were taking place in nearby state parks, the Depression-era cabin was built by CCC instructor Edward Coon and his wife Florence when they realized that they could build an economical home for themselves from harvested and found materials.

Lincoln School, Hornell – the well-preserved example of a neighborhood elementary school replaced an earlier school destroyed by fire and operated from its opening in1924 until 1979.