Richard Parrinello, an on-again, off-again animal control officer for the Town of Brookhaven, was found to have had an illegal side business selling nearly one thousand snakes from his garages. 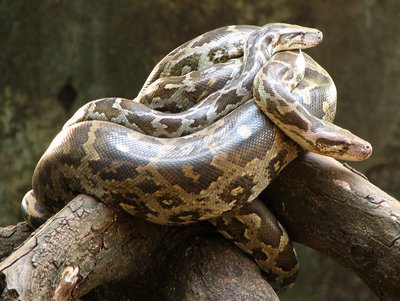 An investigation into alleged disability fraud ended with police getting more than they bargained for on Thursday.

Police found 850 snakes in the Shirley home of Richard Parrinello, an animal control officer for the Town of Brookhaven. Authorities say that Parrinello was selling the snakes as an illegal side job. Parrinello is not a licensed reptile dealer.

“I’d never seen so many snakes in one place before, even in a zoo,” said Ken Gross, chief of Suffolk County’s Society for the Prevention of Cruelty to Animals, to The New York Post.

The reptiles were kept in two garages, and included turtles, turtle eggs, and two 6-foot long Burmese pythons, which are illegal in New York State.

"There is a reason why Burmese pythons are illegal," said Gross to NBC News, citing the deaths of two boys in New Brunswick, Canada, who were suffocated to death by an African rock python while they slept last month.

When authorities who initially were looking into Parrinello for disability fraud saw the massive reptile collection, they called the Suffolk County SPCA to investigate.

“We were called to see whether there was any animal cruelty or neglect, [but] the animals appeared to be healthy and well cared for,” Gross told The New York Post.

All of Parrinello’s boa constrictors, pythons, and hog-nose snakes were kept neatly in bins and fed well, as they were meant to be sold on his website, Snakeman’s Exotics.  Authorities believe that the menagerie was worth an estimated $500,000.

Parrinello was arrested and is facing multiple charges for owning the pythons and violating town code by improperly converting his garage and running a business out of his home without a permit.  The Department of Environmental Conservation also served him two charges

The Burmese pythons will be relocated to a snake sanctuary in Massachusetts.  The placement of the hundreds of other snakes has not yet been announced.