In addition to the flu season coming upon us, parents and children also need to be vigilant of a serious respiratory virus, called EV-D68. Its spread is causing some children to be hospitalized. 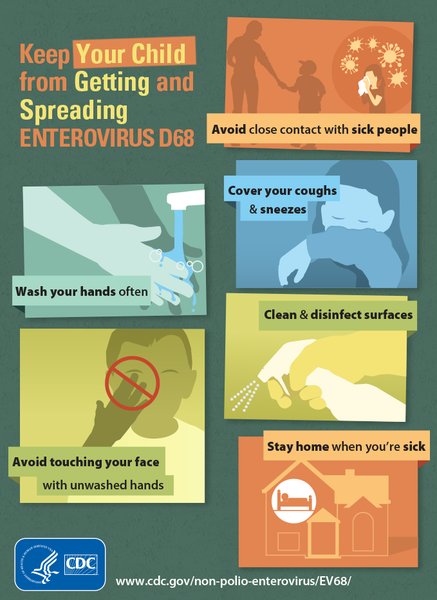 More than a dozen children in New York State have been diagnosed with the serious respiratory virus, enterovirus D68, or EV-D68.

The virus has led to the hospitalization of hundreds of children in the MidWest already, and with cases now showing up in New York, health officials are reminding everyone to be extra vigilant in preventing the spread among children and other individuals.

Right now, “there is no specific treatment or vaccination against this virus, [so] our best defense is to prevent it by practicing proper hygiene,” said NY Acting State Health Commissioner Dr. Howard Zucker, in a press release.

Symptoms of EV-D68 infection include mild to severe respiratory illness, and may include mild symptoms of fever, runny nose, sneezing, cough, and body and muscle aches. Those who get very ill and who have asthma or a history of wheezing may have difficulty breathing.

Infants, children, and teenagers are at most risk of getting infected with EV-D68 because they do not yet have immunity (protection) from previous exposure of these viruses.

Since there is no specific treatment or vaccination for EV-D68, the best protection is to prevent the spread of it. The CDC advises to:

So far, 18 states have confirmed cases of EV-D68 infection. There’s been a total of 153 people infected around the country from mid-August to September 18, 2014, according to the CDC.

If diagnosed with EV-D68, mild cases are addressed with taking over-the-counter medications for pain and fever. Those with more severe cases may have to be hospitalized.

The first case of EV-D68 was identified back in 1962 in California, but reported cases of it has been rare until now.