The Senator was joined by local school board members, dozens of teachers, parents and public education stakeholders. 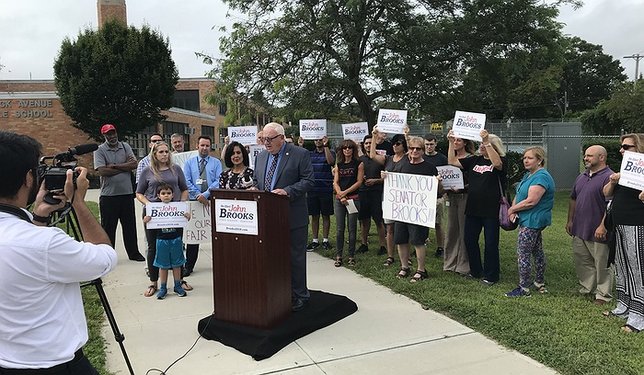 Merrick, NY - Sept. 18, 2018 - Senator John Brooks and local leaders yesterday joined with parents, and educators to demand more support for Long Island public education and students. The Senator was joined by local school board members, dozens of teachers, parents and public education stakeholders as he pledged to fight for more school funding. Senator Brooks also demanded passage of legislation to end the failed practice of forcing educators to teach to high-stakes tests, rather than innovating and helping their students learn. This bill, S.8301, was held up by the Senate Republican Majority despite having overwhelming support in the State Legislature.
“Long Island families are over-taxed and under-served by Albany, and that needs to change,” Senator John Brooks said. “For decades, our taxes have gone up while mandate after mandate has been handed down from Albany. The fact that the Senate Republican Majority refused to allow a vote on a widely supported bill that would help stop the over-testing of our kids is more proof that we need change and new leadership. I am proud to stand up for our students, for our educators, and for our taxpayers, and I will keep fighting for our fair share in state education aid.”
Senate Bill S.8301, was sponsored by a Republican Senator and 54 other members of the 63-member Senate. Despite these facts, the bill was not allowed before the full Senate for a vote, and students are suffering as a result. This legislation would have ended the unfair practice of requiring teachers to be evaluated based on the seriously flawed high-stakes tests. Senator Brooks, a sponsor of the legislation, has pledged to help pass it when he is re-elected to the State Senate this November.
Lois Peck, North Bellmore Public School Teacher said, “Helping students grow into you adults with inquisitive and open minds is why I wanted to be a teacher. However, the high-stakes, high-stress tests that our students are forced to take because of Albany action means I have to teach to exams instead of helping children learn. It is shameful that a bill to undo this damage was used as a political football by Albany politicians, and I am disappointed it didn’t pass into law. Thankfully, Senator John Brooks has proven that he will fight for students, educators, and our local communities, and that is exactly what we need from our representative in the State Senate.”
Matt Kuschner, Parent of a Public School Student, said, “My son loved going to school, spending time with friends, and having the opportunity to learn. When teachers were forced to focus on high-stakes tests and preparing students to take them, that excitement for school turned to dread. It is heartbreaking to see the stress that these tests have put on my son, and I am outraged that the Senate Republican Majority refused to fix this problem when they had the chance to. We need real leadership in Albany, and that will only happen when we send Senator John Brooks back to solve this situation.”