The William Floyd Colonials will host the Longwood Lions for Parkway Power Bowl IV on Saturday, September 19 at 2 pm, a contest named for the William Floyd Parkway, which connects both school districts and ... 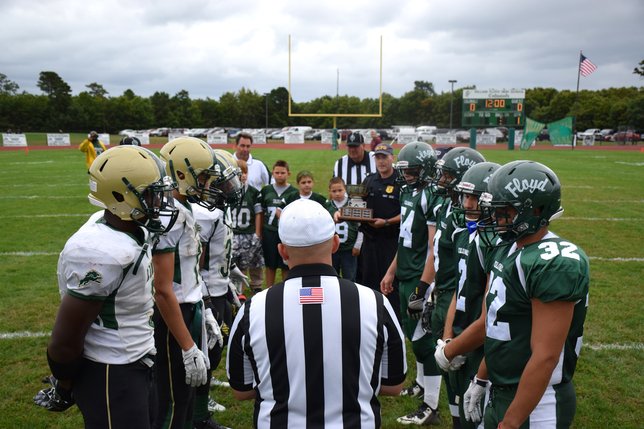 Mastic Beach & Middle Island, NY - September 18, 2015 - The William Floyd Colonials will host the Longwood Lions for Parkway Power Bowl IV on Saturday, September 19 at 2 pm, a contest named for the William Floyd Parkway, which connects both school districts and is served by the Suffolk County Police Department (SCPD) 7th Precinct.

Coming off of opening week victories, the teams will battle in this annual matchup of Division I rivalries in a contest designed to promote the ideals of sportsmanship, goodwill, community relations and friendly competition.

SCPD 7th Precinct officers, team captains, youth football players from both communities and coaches will participate in a ceremonial coin toss before the game. Aside from bragging rights, the final score will be engraved on the Parkway Power Bowl Cup and the winning team will house it in their high school until next year’s matchup.

At the end of the game, 7th Precinct officers will present the winning team with the trophy, which was donated by the William Floyd Alumni Association.

William Floyd owns a 2-1 record in the Parkway Power Bowl, winning the first two contests 38-6 and 21-6. Last year, Longwood took the trophy for the first time with a 46-6 victory.

“The Parkway Power Bowl is always a wonderful event in which two great teams get together for spirited competition between friendly rivals,” said Kevin M. Coster, Superintendent of Schools, William Floyd School District. “Special thanks to the Longwood School District, our friends at the Suffolk County Police Department and the local youth football leagues for helping to make this game a long-lasting community tradition.”

“We are, once again, thrilled to have this opportunity to partner with our friends in the William Floyd School District and the 7th Precinct,” said Dr. Michael R. Lonergan, Superintendent of Schools, Longwood School District. “The Annual Parkway Bowl is a shining example of student-athlete cooperation, sportsmanship and friendly competition. The event is something we look forward to each and every year.”

Later that same evening, two of the rivalry’s best running backs in recent history, Stacey Bedell (William Floyd ’12) and Isaiah White (Longwood ’15), will carry their high school alma maters’ proud traditions in a game against the UNH Wildcats as teammates for the Stony Brook Seawolves.

Pictured: William Floyd will face off against Longwood in the Parkway Power Bowl IV. William Floyd leads the series 2-1. This is the coin toss before last year's contest.