Employees of Hicksville-Based Modeling Agency Charged With Scamming Families Out of More Than $250,000 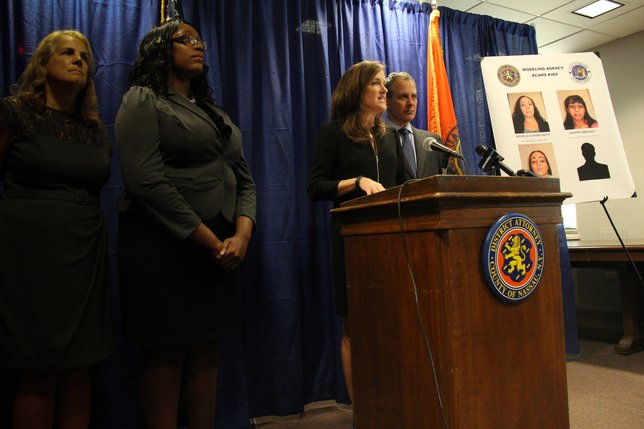 Nassau County, NY - September 18th, 2013 - Nassau County District Attorney Kathleen Rice and New York State Attorney General Eric T. Schneiderman announced today that three employees of a Hicksville-based modeling agency, along with two corporations, have been charged with defrauding dozens of clients out of more than $250,000 by overcharging for photo shoots, misrepresenting the terms of contracts, and promising clients lucrative roles and modeling jobs for their children that never existed. An arrest warrant has been issued for the business’s CEO.

The arrests are the result of a five-month joint investigation between the Nassau County District Attorney’s Office and New York State Attorney General’s Office.

Hundreds of families were led to believe that their child was the next big thing, only to learn that they were just the next in line to be scammed,” DA Rice said. “The defendants built a lucrative business by crushing the dreams of hopeful children and conning parents out of their hard-earned money. With the invaluable efforts of the Attorney General’s Office in this investigation, however, we have put a stop to the lies and will hold the defendants accountable.”

“These suspects exploited something we can all relate to – the love and pride a parent feels about their child,” AG Schneiderman said. “The crimes we allege today are a clear cut scam, and we are bringing the scammers to justice. My office will continue to work with our partners to hold fraudsters accountable and recover restitution for victims.”

DA Rice and AG Schneiderman said that since 2010, James Muniz was president and CEO of the Model Talent Development Corp. (MTD) and New Faces Development Center, Inc. (New Faces) in Hicksville. Between then and New Faces/MTD’s closing in November 2012, Muniz had associates acting as talent scouts in public places and the Queens Center and Roosevelt Field shopping malls, approaching young teenagers and people with small children. The scouts claimed that the child had been chosen because they had a “look” that made them likely to succeed in modeling or acting.

Victims were falsely promised that they would incur no costs for New Faces/MTD’s services, and were misled into believing that only a small percentage of those approached, and subsequently interviewed by New Faces/MTD, were actually offered an opportunity with the company. In truth, New Faces/MTD was not selective at all in choosing its clients, but signed up virtually anyone who would pay.

Victims were subjected to high pressure sales tactics, and were falsely told that their children would lose imminent high-paying employment opportunities if they did not immediately sign up for contracts costing anywhere from $550 to $3,000. Few Faces/MTD lured consumers by misrepresenting its affiliation with famous models and actors, and grossly exaggerated the employment opportunities it offered. In fact, New Faces/MTD rarely obtained modeling or acting employment for its clients, but principally provided photographic services, and for an additional fee, posted photographic images on its website, Gigacomps.com. After paying hundreds, and sometimes thousands of dollars, consumers would often go months without even a telephone call from New Faces/MTD, let alone a job as an actor or model.

Numerous clients were subsequently contacted and told that their children had secured multi-year contracts with retailers such as Macy’s, Toys R’ Us, Abercrombie & Fitch, Hollister, The Children’s Place, Target, and JC Penney, but this required them to enter into additional agreements or extend their current contract with New Faces/MTD. Many were told that they had to accept the agreements or extensions immediately or the alleged modeling job would go to someone else. The payments, usually by credit or debit card, had to be made within 24-48 hours. Payments of thousands of dollars for these agreements and extensions were accepted in person and over the telephone, but no contract with Macy’s, The Children’s Place, or other stores ever materialized. In fact, New Faces/MTD had no arrangements or agreements with any of the major retailers they mentioned to clients.

The Attorney General’s Office had initiated civil proceedings against the company in 2006, when it was known as New Faces and owned by Muniz’s ex-wife. As a result of those proceedings, New Faces agreed to cease its deceptive business practices and paid more than $250,000 in restitution. The AG’s Office opened a new investigation in December 2012 against Muniz and MTD after receiving numerous complaints. Complaints from clients and MTD employees spurred the DA’s Office’s investigation into Muniz and MTD in April 2013. The two investigations merged shortly thereafter.

The investigation into New Faces/MTD is ongoing, and anyone who thinks they may have been similarly victimized should contact DA Rice’s Complaints Unit at (516) 571-3505 or the Attorney General’s Office at (516) 248-3301.

Jennifer Santiago, 26, of Jamaica, Queens, a marketing director and online sales associate, is charged with Grand Larceny in the Third and Fourth Degrees and Scheme to Defraud in the First Degree.

Jennifer Diaz-Domenech, 31, of Brooklyn, a senior development director, is charged with two counts of Grand Larceny in the Third Degree, and one count each of Grand larceny in the Fourth Degree and Scheme to Defraud in the First Degree.

Michelle Alperin-Smith, 42, of Nesconset, vice president of operations, is charged with Grand Larceny in the Third Degree and Scheme to Defraud in the First Degree.

Each defendant faces up to seven years in prison if convicted, and is scheduled to be arraigned later today in First District Court, Hempstead.

Safran is cross-designated as an Assistant District Attorney for the purposes of this prosecution and is also handling any civil matters regarding New Faces/MTD for the AG’s Office.