On September 27, 2015 there will be a total eclipse of the Blood Moon and will be the closet supermoon we will see this year. 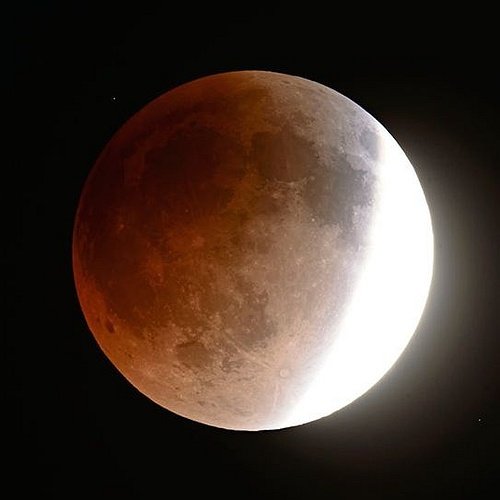 Make sure you don't fall asleep early on the Night of September 27th, 2015. Why's that? Something outstanding is going to happen in the night sky. There will be a total eclipse of the moon which happens to be the closest Supermoon of 2015. It is the Northern Hemisphere's Harvest Moon, or full moon  nearest the September equinox. It's the Southern Hemisphere's first full moon of Spring.

September's full moon is also called a Blood Moon because it presents an eclipse of a lunar tetrad , which occurs when there are four straight total eclipses of the moon, spaced at six lunar months (full moons). Apart.

If this isn't enough to grasp onto, there's more! September's Blood Moon will be the fourth and final eclipse of the lunar tetrad, which is why this eclipse is so important.

The gory name for the 'Blood Moon' is comes from the reddish color tint they take on when sunrises and sunsets seen from Earth reflect onto the surface of the moon.

According to EarthSky.org, September 2015 moon will stay full all night on September 27th & 28th. Like any other full moon,  the Northern Hemisphere's Harvest Moon will shine all night long and is expected to sort the highest in the sky around midnight and will set in the west around sunrise.

Astronomers say that the moon turns full at a well-defined instant: when it's opposite in the sun in ecliptic longitude. The instant this happens on September 28, 2015, at U.S. time zones the precise time of full moon on the night of September 27 will be at 10:51 p.m, EDT, 9:51 p.m., CDT, 8:51 p.m, MDT or 7:51 p.m. At that exact time, due to the eclipse that is happening the moon will be totally submerged in the Earth's dark umbra shadow.

I bet you're on the edge of your seat right now as we come to the last question. Who will see the lunar eclipse on September 27th? It is planned to be visible in the haze of evening dusk on September 27th from the extreme northwestern portion of North America and also could be observed in the haze of morning dawn, September 28th from far-western Asia. North America, South America, the Atlantic Ocean, Greenland, Europe, Africa and the Middle East are in a good position worldwide to watch the total eclipse of the moon.

Star gazing is best done when there little to no  lights surrounding your location. It is recommended to go to an area which is very dark to avoid light pollution. Also, if they weather is cloudy or foggy, visibility might be limited.

This fascinating event is definitely something you don't want to miss out on -
for a full list of Long Island's best Star Gazing Spots, click here!