Property seized by Suffolk County was within the Mastic/Shirley Conservation Area. 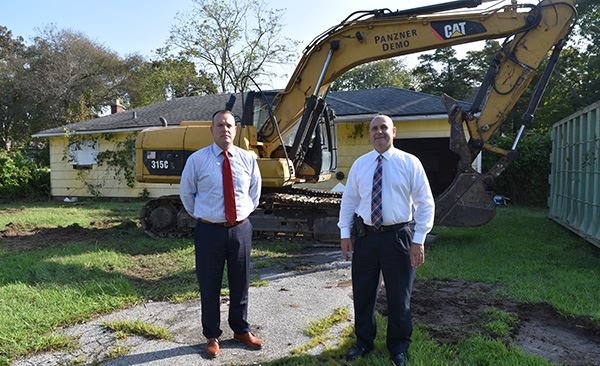 Brookhaven Town demolished a vacant home seized by Suffolk County as a property tax forfeiture to add more open space in the region. The house at 65 Dahlia Drive in Mastic Beach was in the Mastic/Shirley Conservation Area.

According to a statement by the township about the property, a law to preserve open space in the Mastic/Shirley Conservation Area was sponsored by County Legislator Rudy Sunderman and adopted by the Suffolk County Legislature earlier this year. It protects flood prone areas against future flooding and storm damage by creating more open space within the designated conservation zone.

The resolution specifically addressed instances where Suffolk County acquires property because of failure to pay taxes, according to a press release about the law. Structures on properties within the Mastic/Shirley Conservation area will be demolished and the property will be rehabilitated returning it to open space in an effort to restore the coastal marshes.

The law helps the county to deal with a proliferation of zombie homes around the area caused by the recession of 2009 and then later, the devastation that was caused by Superstorm Sandy, while also reclaiming open space.

“Our work will continue until there are no such properties to be demolished and cleaned up, raising property values and the quality of life in the area,” said Brookhaven Town Councilman Dan Panico, who was on hand during the demolition.