Social Security and its future were posed questions to experts at an AARP Community Forum at Hofstra University. 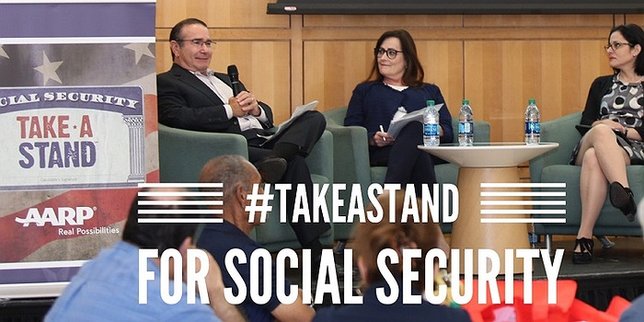 Participants weigh in on future of program at AARP Forum.

Hempstead, NY - September 15, 2016 - Long Islanders said the 2016 presidential candidates and campaign need to focus more on Social Security and its future, and they posed questions to experts today at an AARP Community Forum at Hofstra University just 11 days before the university hosts the first presidential debate of the 2016 campaign.

Social Security benefits will be cut by nearly 25% in 2034 if the program is not updated; such a cut to the popular program into which working Americans pay every day to earn their benefits would mean the loss of about $4,200 a year in today’s dollars for the average New Yorker 65 and above, according to a recent AARP analysis.

Meantime, a recent survey of AARP members showed that those in New York rate having Social Security available to them in the future as their top economic concern, with 87 percent saying they’re “extremely” or “very” concerned about it.

“We’re looking at a 25 percent cut in less than 18 years unless our leaders in Washington act to update Social Security for the 21st Century,” said Beth Finkel. “It’s important that our leaders address Social Security’s solvency – and soon.”

“The population of Long Island and many other suburbs is getting older and older, and most of these people are not now or will not be wealthy or anything close,” said Lawrence Levy. “They also may not have the pensions and other savings of prior generations. That means Social Security will be an ever more important part of maintaining quality of life for more and more people, and the economic vitality of the communities in which they live.”

In fact, Social Security generated over $87 billion in economic activity in New York state in 2012, according to AARP’s Public Policy Institute.

“AARP launched our ‘Take A Stand’ campaign this year to urge the presidential candidates to lay out their plans to update Social Security, to act if elected, and to urge congressional candidates to commit to work with the new administration to get it done,” said Cristina Martin-Firvida. “Options for heading off a 25 percent benefit cut become much more difficult the longer we wait. We need to hear what the candidates would do, and we need action next year during the all-important first year of what could be an eight-year administration.”

AARP is a national sponsor of the presidential debates, and AARP is planning additional activities at Hofstra leading up to the initial faceoff including community listening posts to give students and residents the chance to weigh in on the importance of updating Social Security and an on-campus debate watch party.

AARP is a nonprofit, nonpartisan organization, with a membership of nearly 38 million that helps people turn their goals and dreams into 'Real Possibilities' by changing the way America defines aging. With staffed offices in all 50 states, the District of Columbia, Puerto Rico, and the U.S. Virgin Islands, AARP works to strengthen communities and promote the issues that matter most to families such as healthcare security, financial security and personal fulfillment. AARP also advocates for individuals in the marketplace by selecting products and services of high quality and value to carry the AARP name.  As a trusted source for news and information, AARP produces the world’s largest circulation magazine, AARP The Magazine and AARP Bulletin. AARP does not endorse candidates for public office or make contributions to political campaigns or candidates. To learn more, visit www.aarp.org or follow @AARP and our CEO @JoAnn_Jenkins on Twitter.