These awards promote the causes and needs of those who protect animals. 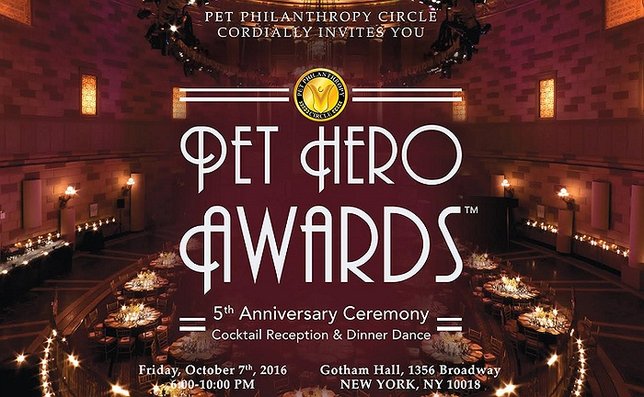 Water Mill, NY - September 14, 2016 - The Pet Hero Awards(TM) are notably the nation’s most prestigious animal welfare award ceremony showcasing people, organizations, corporations, veterinarians and pets that serve to inspire others to promote animal welfare. These awards promote the causes and needs of those who protect animals.

This year’s award winners include an all-star lineup. 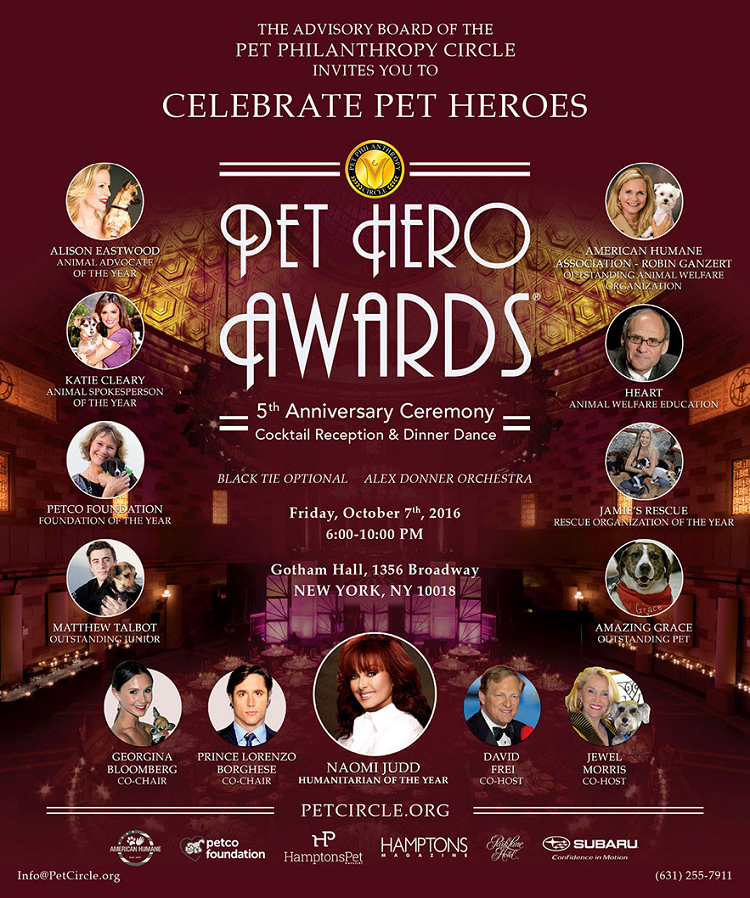 Naomi Judd will be receiving the Humanitarian of the Year Award for her tireless work in lobbying in Washington, DC to ensure the safe return of all service dogs that have served in the US Military.

Alison Eastwood, actress, daughter of Clint Eastwood, and Founder of the Eastwood Ranch Foundation, is the Animal Advocate of the Year, recognized for her outstanding success with saving animals from kill shelters in Southern California.

Dr. Robin Ganzert, will be accepting the Outstanding Animal Welfare Organization award as CEO of the American Humane Association whose efforts have impacted hundreds of millions of animals.

The Petco Foundation is being awarded the Foundation of the Year for helping 4.9 million pets find homes.

Katie Cleary, Executive Producer and Writer of the movie, Give Me Shelter on Netflix, President of Peace for Animals, and Founder and Editor in Chief of the Animal News Network is receiving the Animal Welfare Spokesperson Award.

The Heart Organization has earned the Animal Welfare Education Award for their national youth education program that teaches compassion and respect for all living beings.

Jamie’s Rescue in Miami, awarded the Rescue Organization of the Year, brings focus on the devastating effects of Parvo to rescue organizations and the challenges of rescuing street dogs. Outstanding Junior of the Year, Matthew Talbot, proves we are never too young to make a difference in saving animal lives. The Outstanding Pet, Amazing Grace, a dog destined to a gruesome death in a gas chamber survived and inspires humans to end this cruel, unnecessary way of eliminating dogs.

By showcasing these outstanding contributions, the Pet Philanthropy Circle hopes to inspire everyone to become involved in defending the rights of animals. Honorees and guests fly in from around the country to attend this enlightening and entertaining celebration of animals and the causes that protect them.

The Pet Hero Awards(TM) have proven to be the easiest way to mix and mingle with the Who’s Who of the animal welfare community.