Update: Fire that Ravaged the Jersey Shore Boardwalk Burned for Over 6 Hours

New Jersey residents who were hit hard by Sandy are reeling after seeing their rebuilding efforts go up in smoke with a 6 hour blaze that left behind dangerous smoldering pockets. 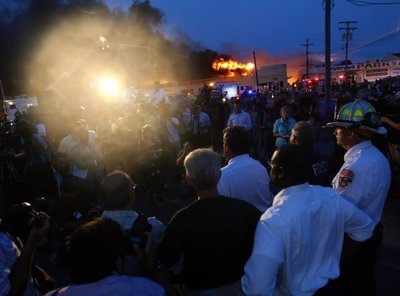 The Jersey Shore Boardwalk is reeling again after a large portion of the boardwalk shops and eateries were consumed by flames less than a year since Hurricane Sandy and one day before Friday the 13th.

The fire started around 2 p.m. Thursday above the Boardwalk in Seaside Park, and within hours, the wind swept the flames to the adjoining Boardwalk of Seaside Heights, according to the New York Times. Over 400 firefighters and nearly 70 fire trucks were called to the scene.

About 20 businesses over a six-block stretch were destroyed in the blaze, though local officials believe that that number is too low.

Funtown Pier, the roller coaster nearly destroyed in Hurricane Sandy, collapsed in flames, and the fire also spread to a historical carousel that was meticulously restored after the storm and had reopened in time for the summer crowd.

The damage extends from Lincoln to Stockton, and affected a four block radius of the Boardwalk.  Though it mostly affected businesses, the fire also spread to one condominium roof, but the flames were put out quickly, and no residents were harmed.

Firefighters are still putting out smoldering pockets on the Boardwalk – “a slow and deliberate process,” said Governor Chris Christie at a media briefing.

Christie also revealed that the cause of the fire is still unknown, stating, “We don’t know yet, and it would be irresponsible for us to speculate.”

“We are tough, and we stand together in a crisis… You once again showed what a resilient community Seaside Heights and Seaside Park are.”

Click here for more photos of the fire that swept the Boardwalk.