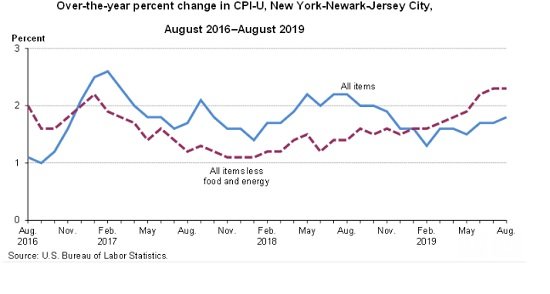 Photo by: Bureau of Labor Statistics

You may be paying more for things in this region – but probably not much except for apparel, according to the latest data.

Consumer prices in the New York-Newark-Jersey City area rose 0.2 percent in August and 1.8 percent from a year ago, according to the United States Department of Labor's Bureau of Labor Statistics' latest data.

The 6 percent rise in clothing came after prices fell 3.1 percent last August, as costs rebounded from that drop. “Apparel prices often rise at this time of year with the introduction of fall and winter lines,” Kohli said of the end-of-summer increase.

Prices for food away from home jumped 0.7 percent, the largest increase in over a year, he said. Prices for food at home increased 0.5 percent, with higher prices in three of the six grocery groups.

The index for all items except food and energy increased 2.3 percent over the year, largely due to a 2.2-percent increase in the index for housing.

“In contrast, energy prices declined 4.0 percent over the year, reflecting in part a 4.7-percent drop in the price of gasoline,” Kohli said.