NYAGV PSAs Highlight the Dangers of Guns in the Home

It's your right to own a gun. But do you really want to? 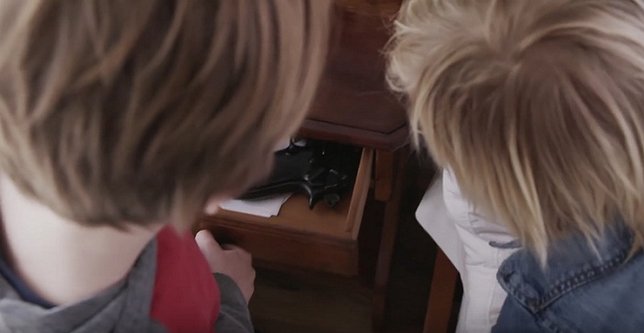 Childsplay can end in tragedy.

Photo by: New Yorkers Against Gun Violence, via YouTube.

Long Island, NY -  September 7, 2016 - The corporate gun lobby has relentlessly pushed the myth that a gun in the home makes us safer. The reality is that the gun you buy for protection is 22 times more likely to be used in an accident, suicide, or homicide, than in a defensive scenario. Is that a risk you're willing to take?

A central part of our mission is to educate the public about the real dangers of guns. New Yorkers Against Gun Violence (NYAGV) is releasing the second in a series of public service announcements (PSAs) to highlight the dangers of guns in the home.

"Game," showed how childsplay can end in tragedy. During National Suicide Prevention Week we are releasing "Breakup" that shows when a gun is present, an attempted suicide almost always ends in death.

Suicide is often an impulsive act, particularly among young people, and public health experts agree that its deadliness is dependent on the lethality of the means used. The easy accessibility of guns in American homes means that nearly two-thirds of gun deaths are suicides. If fewer people had access to guns, the rate would fall substantially.