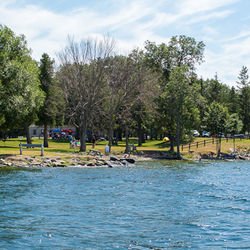 “From fishing and hiking to biking and camping, New York State Parks offer a wealth of extraordinary opportunities that more and more visitors are coming to discover,” Governor Cuomo said. “I encourage New Yorkers and visitors alike to mark the end of the summer, or to kick off Fall with a trip to one of New York’s State Parks and experience some of the natural beauty that lies in every corner of this state.”

Park attendance was boosted by a variety of factors, including the return of fireworks to Jones Beach State Park after a five-year absence; national exposure for Letchworth and Watkins Glen State Parks, which were ranked first and third best state parks in the nation by USA Today; improvements to the newly designated Buffalo Harbor State Park on the city’s waterfront; favorable weather through the summer; and a late season.

Under Governor Cuomo's leadership, New York State is making a historic commitment to improving and expanding access to outdoor recreation. The Governor's NY Parks 2020 program is a multi-year commitment to leverage $900 million in private and public funding for State Parks from 2011 to 2020. The Governor's 2015-16 Executive Budget allocates $110 million toward this initiative.