On August 18,2015, Michael Dombek was arrested and charged with twenty-five counts of animal neglect after investigators found starved and injured animals. 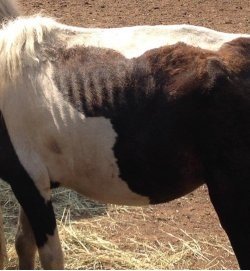 Bethpage, NY - September 8, 2015 - On August 18,2015, Michael Dombek was arrested and charged with twenty-five counts of animal neglect after investigators found starved and injured animals. Several horses and donkeys with open wounds and rib cages showing were seized so that they could receive more exigent medical care. At the arraignment, the sitting judge also ordered the remaining animals which included five ponies and two dogs impounded in place. He also authorized the Nassau County SPCA to oversee that the remaining animals would be fed and cared for properly.

Bob Sowers, a spokesperson for the SPCA said that an investigator with extensive experience with horses , along with a certified vet tech were visiting the site daily .

At a hearing in District Court, on Friday, September 4th, Mr Dombek and his attorney complained to Judge E. Bjornbey that the visits of the SPCA were threatening and not necessary. For reasons known only to him, the judge ordered that the visits be reduced to Tuesdays and Wednesdays only. A stunned Sowers said that "To look at photos of these animals and think that their care will be improved without close monitoring is not only outrageous but is totally irresponsible on Judge Bjornbey's part. "Further, common sense should have dictated that Judge Bjornbey reserve decision until he took the time to check with the investigator who was there daily". "The judge then would have been aware that we have had medical issues that would not have been addressed without our onsite direction. "Any problems that arise as a result of this ridiculous order fall directly on the shoulders of Judge Bjornbey."