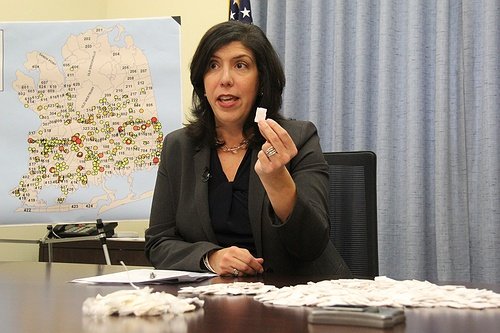 Mineola, NY - September 4, 2015 - Acting Nassau County District Attorney Madeline Singas announced her office’s authorship of a package of five bills designed to combat the nationwide heroin epidemic’s effects in New York, and called upon state legislators today to hold a special session to consider the fully-written legislation as soon as possible this year.

“An epidemic of heroin abuse is exploding across the country and here in New York,” Acting DA Singas wrote in a letter delivered today, “This is a crisis that requires immediate legislative action.”

In her letter to State Senate and Assembly leaders (attached), Acting DA Singas noted her office’s efforts on prevention and treatment, as well as support for past reforms to New York’s “Rockefeller” drug laws, before summarizing five bills written by her staff that place a laser focus on dealers while maintaining protections for heroin users with true addiction problems and “Good Samaritans” who report medical emergencies.

“As a prosecutor, I have spoken to too many heartbroken parents who have lost their children to overdoses, and seen too many promising lives cut short by this epidemic,” Acting DA Singas wrote today. “These legislative changes will give prosecutors better tools to take on street-level dealers, to identify their suppliers, and to collaborate with our law enforcement partners to cut the pipeline of heroin into our state and our neighborhoods.”

ABOUT THE BILLS
A team of prosecutors led by Acting DA Singas collaborated and consulted with a wide variety of advocates, experts and law enforcement partners in drafting the five-bill package, including the Special Narcotics Prosecutor for the City of New York, Bridget Brennan. The bills (1) create a new “death by dealer” statute that allow felony homicide charges against dealers whose customers die from overdoses, (2) shut heroin dealers out from qualifying for non-jail “diversion” dispositions intended for addicts, (3) increase penalties for dealers who sell heroin to children, (4) increase penalties for the possession of dealers’ instruments, and (5) increase penalties and revoke licensing for doctors and pharmacists who illegally sell prescriptions and prescription drugs, which are considered to be a gateway to heroin abuse.

ABOUT NCDA EFFORTS IN THE FIGHT AGAINST HEROIN
The Nassau County District Attorney’s Office has been aggressively engaged in the fight against the heroin epidemic with a three-pronged approach that embraces early prevention, effective treatment for addicts, and aggressive prosecution against dealers. In addition to today’s legislative initiative, the office has conducted school presentations that have reached tens of thousands of students and their parents; partners with federal and local law enforcement agencies like the DEA, FBI, State Police, and NCPD in the New York Drug Enforcement Task Force; and has been co-chair of the 300-member Nassau County Heroin Prevention Task Force, which has met every month in the County Executive’s Office since the Task Force’s founding in 2009.

Numerous major cases involving heroin dealers and illegal prescription drug sales are pending before the DA’s Office, including the takedown of a heroin pipeline into Nassau County alleged to originate from Mexico, the takedown of an alleged Bloods-run dogfighting and heroin sales ring, and the arrest of a cardiologist alleged to have sold prescription drugs illegally during the course of a related illegal gun and murder-for-hire scheme.

Acting DA Singas’ full letter to the Legislature is attached.