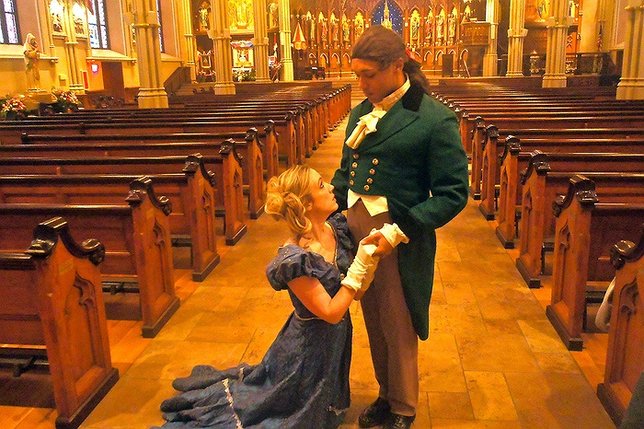 Sag Harbor, NY - Sept. 6, 2018 - Bay Street Theater is pleased to announce Divaria Productions will be presenting a blend of theater and opera in a performance of Don Giovanni in New York on Saturday, September 22 at 8 pm. The live production celebrates the iconic musicians and story behind the historic performance of New York’s first Italian opera. Ticket prices range from $25 to $50 and are available by calling the Box Office at 631-725-9500, open Tuesday through Saturday 11 am to 5 pm, or online at www.baystreet.org.
Almost 200 years ago, three musical icons performed New York’s first Italian opera, Don Giovanni, in lower New York. On September 22, they’re back.
Divaria Productions presents Don Giovanni in New York, in collaboration with the Bay Street Theater. The unique production re-enacts events leading up to one of the earliest opera performances in the United States, Don Giovanni, in 1826.
The historical production celebrates the connection between Mozart’s librettist (and one of New York’s first Italian immigrants) Lorenzo da Ponte, Spanish bel canto expert Manuel Garcia and his daughter, opera diva Maria Malibran. On May 23, 1826, the three musicians performed Don Giovanni for the first time in America at the long-gone Park Theatre on Park Row in lower Manhattan. Exactly 192 years later on May 23, 2018, Divaria Productions premiered this production at the Basilica of St. Patrick’s Cathedral, the same historic space where the three legends perform a concert of sacred music.
Blending selections from the music of Don Giovanni with an original script based upon Da Ponte’s memoirs and Malibran’s and Garcia’s letters, Don Giovanni in New York tells the story of the three musical icons’ collaboration and their important contribution to Italian culture and the arts.
Don Giovanni in New York is directed by Anton Armendariz Diaz and conducted by Nicolo Sbuelz, from a script by Andrew Bell. It features Ricardo Rivera, Richard Bernstein, Helena Brown, Christopher Nelson, Ashley Galvani Bell, Natalie Havens, Eliam Ramos, Michal Gizinski, Paulina Cossio and Anton Armendariz Diaz. This production also features members of the Choral Society of the Hamptons who will serve as the chorus for the production.
This event is made possible with funds from the Decentralization Program, a regrant program of the New York State Council on the Arts with the support of Governor M. Andrew Cuomo and the New York State Legislature, and administered by The Huntington Arts Council.
Bay Street Theater & Sag Harbor Center for the Arts is a year-round, not-for-profit professional theater and community cultural center which endeavors to innovate, educate, and entertain a diverse community through the practice of the performing arts. We serve as a social and cultural gathering place, an educational resource, and a home for a community of artists.