The SCPD is looking for a man who stole a donation jar from a Centereach gas station. 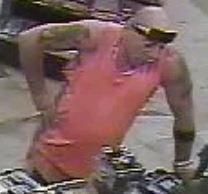 Centereach, NY - Septeber 5, 2014 - Suffolk County Crime Stoppers and Suffolk County Police Sixth Precinct Crime Section officers are seeking the public’s help to identify and locate the man who stole a donation jar from a Centereach gas station last month.
A man entered Gulf, located at 1740 Middle Country Road, purchased a lottery ticket and then argued with the employee about the change he received. While the employee was speaking to her boss regarding the problem, the man stole a donation jar off the counter on August 18 at approximately 8:25 p.m. The donation jar, which contained approximately $30, was used to collect funds for abused children.
The man, who was described as white, approximately 6 feet 1 inch tall, bald with a handlebar mustache, fled the scene on a bicycle.