More than 170,000 viewers tuned in, if that's the word, at one time to watch the Mets on YouTube in a game that ended with an 8-4 victory for New York. 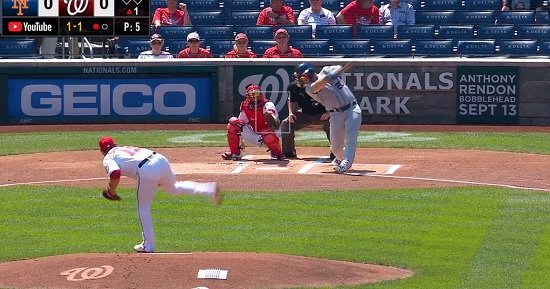 Pete Alonso hits a ball long and far early in the game, before it's caught - only to return and hit a solo home run.

More than 170,000 viewers watched the New York Mets  defeat the Nationals 8 to 4 at  Nationals Park in Washington D.C., in a game broadcast Wednesday, September 4 at 1 p.m. Eastern Standard Time only on YouTube.

While it may not be up there with a World Series win or a no-hitter, it was definitely another Mets moment. Jeff McNeil took a ball on the first pitch as the Mets and the Nationals faced off.

And the Mets continued to play ball in the virtual world of online only broadcasting via YouTube at least for one game. Although the game started with about 50,000  viewers, more than 130,000 were soon watching the teams clash on the digital diamond as viewership grew.

By 3 p.m., about 150,000 viewers were watching, as baseball fans got one more statistic to minotor. By the time the Mets took a 7-1 lead, numbers began to decline, but only slightly. By the time the Nationals closed the gap to 7-4, the crowd topped 170,000, remaining close to that when the Mets won 8-4.

The Mets already played a game broadcast online via Facebook, but this YouTube game is seen as a simpler process to view:

The Mets/Nationals game is part of a 13 -game deal between MLB and YouTube, which could be expanded into a bigger partnership.

“The MLB Game of the Week Live on YouTube brings live baseball to YouTube,” according to a statement by Major League Baseball. “Watch select live games every week of the regular season."

The game includes a live chat by invitation only with representatives of the Mets, Nationals, MLB and others as text pops up beside the images of the game.

YouTube said the games are available on YouTube globally, excluding certain nations, such as Japan, Germany and Australia.

YouTube has exclusive distribution rights in the United States, Canada and Puerto Rico. More information about the arrangement is available by clicking this YouTube link.

"Every matchup will include a pregame and postgame show and will contain MLB and YouTube-themed content," according to YouTube. "Each game will be produced and enhanced exclusively for the YouTube platform by MLB Network's Emmy Award-winning production team."

Google bought Youtube in 2006 for $1.65 billion and now opeartes it as a subsidiary. Three former PayPal employees created the service ony about  year earlier in February of 2005.

Upcoming baseball games on YouTube are listed below, although none involve New York teams.