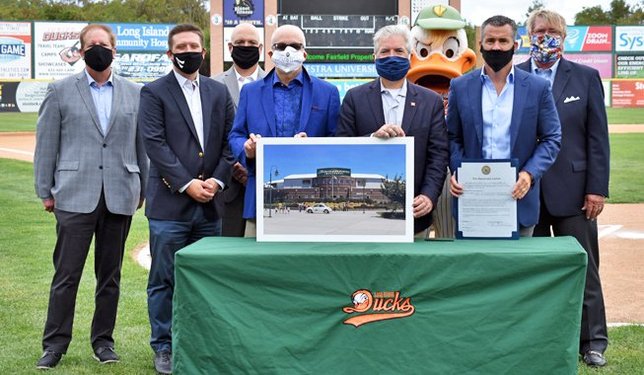 Suffolk County Executive Steve Bellone didn’t get to throw out the first baseball for the Long Island Ducks season this year. As with many other things, the season was cancelled due to COVID-19. Bellone did get to pitch two bits of news for baseball on Long Island.

“Long Island Ducks baseball will be here for the next ten seasons,” he announced from a podium on the baseball field.

He called it an “incredible new partnership with this great Long Island company.”

President of the Long Island Ducks, Michael Pfaff, spoke about the new partnership and the next season.

“A new lease and a new naming rights partner of this magnitude just indicates the enduring strength of the Ducks as both a marketing brand and as a professional sports brand,” Pfaff said.

He also said the team looks forward to announcing their 2021 schedule, implying that Ducks baseball will be back next season.

The naming rights agreement with the County of Suffolk, which amounts to $7 Million over 15 years, will allow Fairfield Properties to place its branding on the ballpark and on approximately 50 roadway directional signs located throughout the county. According to a statement released by the organization.

The current naming rights deal, with Bethpage Federal Credit Union, worth $230,000 annually to the County of Suffolk, expires at the end of the 2020 calendar year.