Data suggests overdose deaths on the rise during COVID-19 quarantine on Long Island. 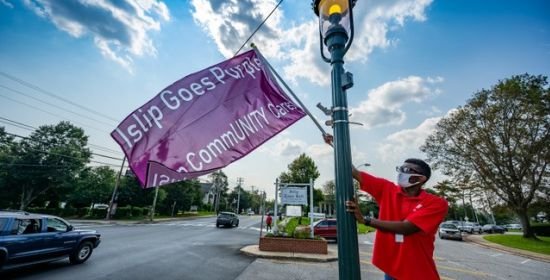 The Town of Islip has a month long campaign prepared this year to support addiction recovery awareness. In Huntington, Town Supervisor Chad Lupinacci had purple lights installed on the lampposts lining the walkway on the front lawn of Town Hall on Monday, August 31 to draw attention to preventable overdose deaths.

August 31 marked International Overdose Awareness Day and according to a website dedicated to the movement, the day aims to raise awareness of overdose and reduce the stigma of a drug-related death.

“It also acknowledges the grief felt by families and friends remembering those who have died or had a permanent injury as a result of drug overdose,” the website says.

According to the website, North America continues to experience the highest drug-related mortality rate in the world, accounting for 1-in-4 drug-related deaths globally. In January 2017, the Center for Disease Control estimated that 64,070 people in the United States died from overdose in the 12-month period prior to January 2017.

According to a statement from the Town of Islip, the entire month of September is dedicated to recovery awareness.

In support of that Islip Town has turned purple with signage, ribbons and flags that adorn its streets, trees and lamp posts. The Islip Town Hall cupola will be lit purple all month. Resourceful television programming will air weekly on Channel 18 and Verizon Channel 1982. The town also has a website to promote the campaign.

"Recovery is possible," said Islip Supervisor Angie Carpenter. "Islip Goes Purple is about supporting those who are struggling with addiction or who have lost a loved one from an overdose.”

According to an article on the Islip Town website, after falling in recent years, overdose fatalities are heading back to all-time highs. According to the CDC, annual overdose deaths jumped 5% in 2019 to 72,000. The COVID-29 crisis may be contributing as well.

Suffolk County’s preliminary data released in May suggest a 40% increase in fatal overdoses over the 89 deaths reported during the same period in 2019. Early local reporting indicates that Suffolk County, particularly Islip and Brookhaven Towns are significantly impacted.