Governor Cuomo today announced that temporary lane closures associated with road and bridge construction projects on New York State highways will be lifted from 6 a.m. on Friday, September 4, to 6 a.m. on Tuesday, ... 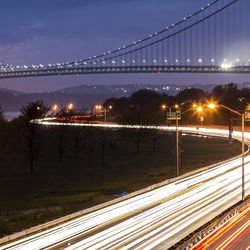 Albany, NY - September 3, 2015 - Governor Cuomo today announced that temporary lane closures associated with road and bridge construction projects on New York State highways will be lifted from 6 a.m. on Friday, September 4, to 6 a.m. on Tuesday, September 8, in order to accommodate travelers during the Labor Day holiday weekend. Some work may continue behind permanent concrete barriers or for emergency repairs.

“This action puts drivers first and will help New Yorkers get to where they are going faster and with less aggravation during this busy Labor Day weekend,” Governor Cuomo said. “I encourage everyone to stay safe, keep your eyes on the road and enjoy the holiday.”

The prohibition of non-essential lane closures is in keeping with Governor Cuomo’s Drivers First program, which prioritizes the convenience of motorists to minimize traffic congestion and travel delays due to road and bridge work.

AAA predicts that more than 35.5 million people will travel more than 50 miles from home this weekend, up slightly from last year. This weekend is expected to have the highest travel volume since 2008.

New York State Thruway Authority Executive Director Robert Megna said, “Labor Day weekend is one of the busiest times of the year for the Thruway and all of New York’s highways. The Thruway Authority is pleased to once again join the Department of Transportation in putting travelers first and mitigating traffic by suspending construction projects on our roadways over the holiday weekend.”

There will be slight variations for certain Thruway projects based on previous traffic volume. A detailed schedule of Thruway lane closures throughout the holiday weekend is available at here.

Mobile users can download the updated, free 511NY mobile app from the iTunes or Google Play stores. The app now features Drive mode, which provides audible alerts along a chosen route while a user is driving, warning them about incidents and construction. Users can set a destination prior to departing and receive information on up to three routes.

MTA Bridges & Tunnels
To help smooth travel for those hitting the road for the Labor Day weekend, MTA Bridges and Tunnels will suspend most construction and temporary lane closures at its seven bridges and two tunnels beginning 6 a.m. Friday, September 4 through Tuesday, September 8. The movable barrier at the Verrazano-Narrows Bridge will be moved by 1 p.m. to facilitate holiday traffic. Motorists are urged to use E-ZPass when they travel to save both time and gas. For more information about E-ZPass or to apply online visit: here or call 1-800 333-TOLL.

New York City Subways and Buses
MTA New York City Transit subways and buses and MTA Bus Company buses will operate on a Sunday schedule on Labor Day, Monday, September 7. The Church Av 2 station will be closed and bypassed from 2 a.m. to 4 a.m. on Monday, September 7, because of the J’Ouvert Parade, and the Eastern Pkwy- Brooklyn Museum 234 station will be closed and bypassed from noon to 7 p.m. because of the West Indian-American Day Parade along Eastern Parkway in Brooklyn. Four trains will make local stops in Brooklyn, and buses in the area will be rerouted.

Travelers are reminded to check 511NY by calling 511 or by accessing www.511ny.org before departing. The free service allows users to check road conditions or link to air and transit information.