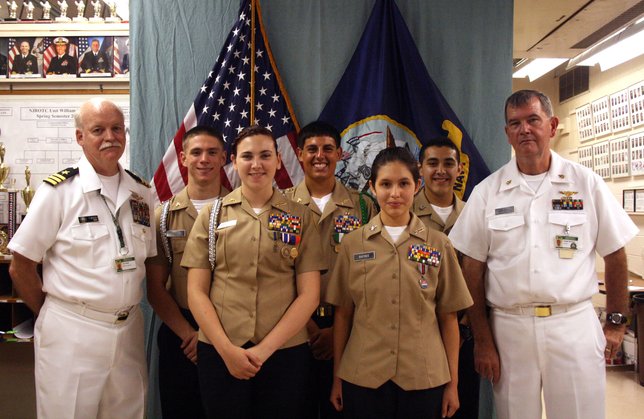 Attending the Boys and Girls State on scholarships provided by the American Legion Arthur H. Clune Post 1533 out of Mastic Beach were Cadets Endy Chicas, Taylor Hausser and Rashelle Batres. Additionally, Cadets Alex Hughes and Corey Penney had the opportunity to experience the LA/ST training program.

“We are excited about these five cadets and their ability to make a tremendous impact on our program this fall,” said Commander Jay Tweed, Senior Naval Science Instructor, William Floyd NJROTC. “Their great character and high competence level along with these new experiences will be an asset to the program.”

For Girls State held on the campus of SUNY Brockport, Cadets Hausser and Batres both participated in creating a mythical 51st state where they operated governments on the county and state levels. The goal of the Girls State program is to help students gain a deeper understanding of the principles of a democracy and the role that individual citizens play in carrying out those ideals. Participants experienced the two-party system, worked on political campaigns, and both drafted and debated bills. Hausser is also a previous LA/ST graduate, having earned a leadership cord and valuable experience in sailing regattas on Narragansett Bay during the summer of 2013.

Cadet Chicas also had a busy week at Boys State held on the campus of SUNY Morrisville, where he participated in mock government which included legislative sessions, court proceedings, law enforcement presentations, assemblies and more. During the program, Endy also received guidance from members of the United States Marine Corps making the experience that much more memorable for him.

Participating in LA/ST, a highly-competitive program consisting of attendees who excel in academics, physical fitness, aptitude and leadership abilities, Cadets Hughes and Penney had the opportunity to work with approximately 140 NJROTC cadets from the northeast and mid-Atlantic regions at the Newport Naval Station in Rhode Island, focusing on Science, Technology, Engineering and Mathematics (STEM) and sail training. As a result, both earned their silver aiguillette leadership cord to wear on their uniforms.

“With three years of naval science studies each behind them, these five cadets are certainly headed toward great things after high school,” said Senior Chief Dwight Becherer, the other naval science instructor at William Floyd High School.

In addition to the leadership roles these five students will serve the William Floyd NJROTC with this year, they are highly involved in academics and extracurricular activities, including taking numerous advanced placement courses, participating in sports, music, student government, mock trial and more.