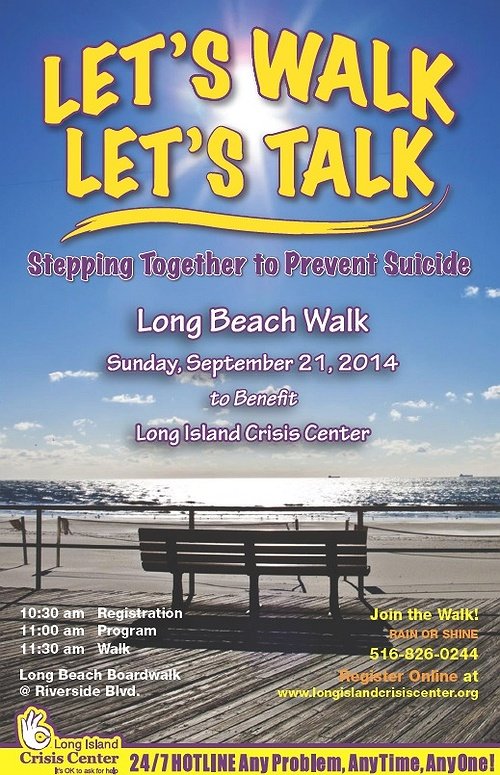 Update - September 19, 2014 - There has been a slight location change. The walk will take place at the Long Beach Boardwalk at the field between Riverside Blvd. & Long Beach Rd.

The Crisis Center, now in its 43rd about the warning signs of suicide, and de-stigmatizing the subject of suicide and spreading the word that “it’s okay to ask for help.”

“With the recent suicide of Robin Williams, our hotline calls were up 100% for a couple of days,” states Linda Leonard, Executive Director of the Crisis Center. "This tragedy seems to have created a greater awareness of suicide and the need to reach out for help – both by those exhibiting suicide ideation and those noticing the “signs” in relatives or friends. As one caller said, ‘I’m very depressed, I feel alone and I’ve lost my job. I’m calling because I don’t want to go down the same road as Robin Williams.’ Our Walk is an opportunity to continue to raise the public consciousness.”

Suicide and suicide prevention affects everyone:

• Suicide now ranks in the top ten leading causes of death in the United States
• Every 15 minutes, someone dies by suicide
• A veteran dies by suicide at the rate of almost one per hour
• For every person who commits suicide, there are thirteen others who attempt suicide
• Suicide is the third leading cause of death in young people ages 13 – 24
• LGBT (lesbian, gay, bisexual, trangender) youth are at a four time higher rate for suicide and suicide attempts
• Self-injurious behavior among youth can be a precursor to suicide ideation
• 39% of teens who are on social media networks are or have been cyber bullied year, is dedicated to increasing suicide awareness, educating everyone
• Elderly suicide rates are 50% higher than for young people
• The fast growing segment for suicide is baby boomers
• 8 out of 10 people who die by suicide tell someone first

On-site registration for the Walk begins at 10:30 a.m. Online registration is taking place right here or call 516-826-0244 for more information. A minimum donation of $25 per person is suggested.