Yesterday, members of the Albertson Fire Department and the leadership of the Firemen’s Association of the State of New York gathered to honor two of their own. 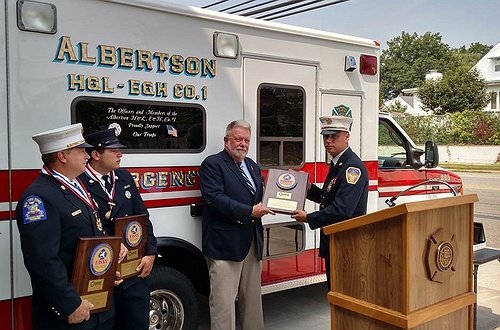 Albertson, NY - August 31, 2015 - Yesterday, members of the Albertson Fire Department and the leadership of the Firemen’s Association of the State of New York gathered to honor two of their own. Joel and Andrew Melamed were recognized in a ceremony at their hometown Albertson Fire Department after receiving the FASNY EMS Provider of the Year Award in Albany on August 22nd.

The Melameds received the award after executing a daring and dramatic rescue of jet skier on Long Island’s Great South Bay in July of 2014.

“Joel and Andrew’s actions are consistent with the finest traditions of the volunteer fire and EMS service,” said FASNY President Robert McConville. “Through quick thinking, courage, and teamwork, they saved the life of a fellow human being under very dangerous conditions. For their heroism, FASNY is proud to name Joel and Andrew EMS Providers of the Year.”

"Without any hesitation, Joel and Andrew did what they always do as emergency responders; put themselves in harm's way to save the life of someone they didn't even know.  Their quick thinking and heroism helped prevent a tragedy.  They epitomize the very best of our volunteer firefighters and EMS personnel.  Congratulations to them on earning this well-deserved honor," said New York State Senator Jack M. Martins.

“I congratulate Joel and Andrew Melamed for receiving this wonderful recognition and award. Their heroic actions combined with their specialized training made the difference in saving a life. I am so proud to have such courageous EMS providers in my Assembly District,” said New York State Assemblywoman Michelle Schimel.

“We have many first responders here in Nassau County, all of whom make sacrifices for the betterment of our community,” said Nassau County Executive Edward Mangano. “Joel and Andrew Melamed showed outstanding courage and initiative in rescuing a fellow mariner on the Great South Bay. They are worthy recipients of the FASNY EMS Provider of the Year Award, and serve as inspiration to us all.”

“Our first responders in North Hempstead do a remarkable job in protecting our community,” said North Hempstead Town Supervisor Judi Bosworth. “It is a true pleasure to see two of their number receive such recognition for their service. I would like to extend my heartfelt congratulations to Joel and Andrew Melamed for a very well-deserved FASNY EMS Provider of the Year award.”

DESCRIPTION OF THE RESCUE
On July 20, 2014, the Melameds were relaxing, off-duty, on their boat in Long Island’s Great South Bay when a mayday call came over the maritime radio. A jet skier had collided with another vessel in the Lindenhurst Channel, the operator unconscious in the water.

Springing into action, the Melameds maneuvered their boat closer and located a 45-year-old man face down in the water. The Melameds dove into the water, swam to the unconscious individual, and hauled him aboard the swim platform of another boat that had come to assist.

The victim was unconscious and not breathing. The Melameds began to perform CPR as the boat raced toward the shore. They had to maintain their balance on the narrow swim platform and avoid the boat’s spinning propellers, which were only a few inches away.

After approximately 10 minutes, the boat was intercepted by the US Coast Guard. The patient was transferred to the Coast Guard vessel, along with the Melameds who continued to perform CPR. By the time the Coast Guard vessel reached its dock, the patient had regained a faint pulse and was breathing again. He was transported to Good Samaritan Hospital in West Islip by the Babylon Volunteer Fire Department.

Two weeks later, the patient was released from the hospital, having made a full recovery.

Aside from demonstrating remarkable bravery in this incident, the Melameds also showed how early and effective CPR can make the difference between life and death. The urgency and skill with which Joel and Andrew handled the emergency undoubtedly helped to save the victim’s life. For these efforts, Joel and Andrew Melamed are named the FASNY EMS Providers of the Year.

About FASNY
Founded in 1872, the Firemen’s Association of the State of New York (FASNY) represents the interests of the more than 92,000 volunteer firefighters and emergency medical personnel in New York State.  For more information, visit www.fasny.com.

Photos courtesy of the Firemen’s Association of the State of New York.