For his Eagle Scout project, Matthew did his project at the Smithtown Historical Society. 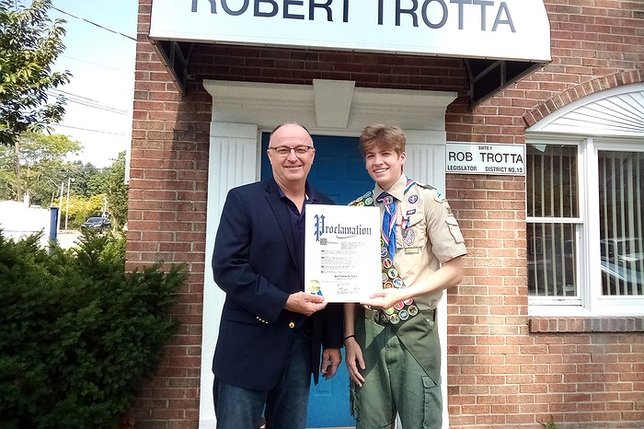 Pictured outside of his office are Legislator Rob Trotta and Eagle Scout Matthew Peters.

Photo by: Office of Legislator Trotta

Suffolk County Legislator Rob Trotta recently welcomed Eagle Scout Matthew Peters to his office to congratulate him on attaining this rank and to present him with a proclamation recognizing his accomplishments. Matthew joined the scouts in 2009, held many leadership positions, and earned 43 merit badges and the World Conservation Award. He is a member of the Order of the Arrow, also known as the Boy Scout National Honor Society.
For his Eagle Scout project, Matthew did his project at the Smithtown Historical Society. He cleared an area of the sheep pasture and replaced the worn chicken wire fence with a new three-rail wooden fence that runs 200 feet long and added turkey wire to contain the sheep. Each post is 8 feet apart and its top angled to prevent water from collecting and causing the wood to rot.
A recent graduate of Smithtown High School West, Matthew was a member of the National Honor Society, as well as the Math, German, and Technology Honor Societies. He took several advanced placement courses and participated in running Cross Country and Track. Matthew will attend Iona College this fall, majoring in computer science.
“Throughout your youth you have demonstrated a strong commitment to the community by being an altar server at St. Joseph’s Church, as well participating in a travel soccer team that promoted community service and your years involved with the scouts. You have set a high standard of civic responsibility that the youth of our great County of Suffolk may follow as you serve as inspiration to them,” said Legislator Rob Trotta.