Mandy Gonzalez: Fearless! was sold out to an appreciative audience on Monday, August 27. 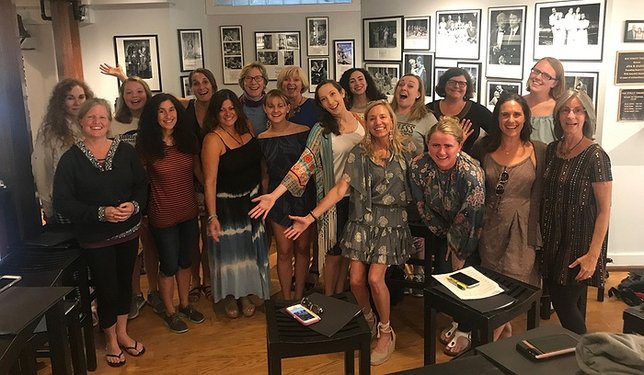 Sag Harbor, NY - August 29, 2018 - Bay Street Theater & Sag Harbor Center for the Arts is pleased to announce Mandy Gonzalez: Fearless! was sold out to an appreciative audience on Monday, August 27 at 8 pm as the final performance in Bay Street’s Music Mondays summer series. Gonzalez was joined by a local back-up choir known as the Fearless Female Choir.
The sensational Mandy Gonzalez is known for her role in Hamilton. Lin-Manuel Miranda (from Hamilton) has called Gonzalez, “one of the greatest singers on earth." She also had roles in Wicked, In the Heights, and Madam Secretary.
“When living and working in the Hamptons, you never know what special experiences may come your way,” says Bay Street Theater’s Executive Director Tracy Mitchell. “We were thrilled when we were told that Mandy had invited us to put together a Fearless Female Choir made up of local girls and women who love to sing.”
The Fearless Female Choir was made up of several local students and about 20 adults who graced the stage for a few numbers with Gonzalez. Local teen talent Reilly Rose Schombs, who is well known in the performing community, was joined by many other recognizable East Enders—including Mitchell herself and Box Office Manager Charlene Beckwith for this once-in-a-lifetime experience. Schombs’ parents Christina Martin and Nick Martin are both Bay Street Theater supporters and have encouraged their daughter’s passion for performance. Schombs also assists with summer theater camps as part of Bay Street’s educational programs. Mitchell noted that Tina Mills was also helped in recruiting some local talented women.
The choir performed with Gonzalez for two of her songs during the concert. Themost well- known Fearless, is the title of her newest album, with music and lyrics by Lin-Manuel Miranda. The other song was Starts Right Now.
During her concert, the unmatched power and grace of her signature style turned new songs into instant classics and made classics sound new again. “From Mandy's signature song, Breathe, written by Lin-Manuel Miranda to her captivating cover of Bruce Springsteen's Born to Run -- Mandy was electrifying,” says Mitchell. “It was an exciting night of music for the audience and everyone on stage!”
Bay Street Theater’s Music Mondays were sponsored this summer in part by Douglas Elliman Real Estate, GroundLink, and Grenning Gallery.
For more information about upcoming events atBay Street Theater, log on to baystreet.org or call the Box Office at 631-725-9500. The Box Office is open daily from now through
September 2 from 11 am - showtime.  The Box Office will reopen on September 4 with new hours: Tuesday – Saturday, 11 am to 5 pm.
Bay Street Theater and Sag Harbor Center for the Arts is a year-round, not-for-profit professional theater and community cultural center which endeavors to innovate, educate, and entertain a diverse community through the practice of the performing arts. They serve as a social and cultural gathering place, an educational resource, and a home for a community of artists.