Admission Will Cost Just $1 For Select Fairgoers Through End of the Fair. 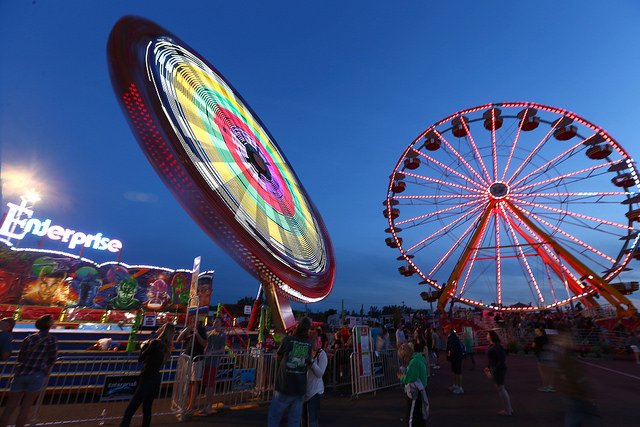 Albany, NY - August 29, 2017 - Governor Andrew M. Cuomo today announced four additional Special Fair Days at The Great New York State Fair to celebrate the success of the first half of the 2017 Fair. On Sunday, the Fair set an all-time single-day attendance record of 123,206 and Monday set a record for the highest attendance on that date, at 88,943. Starting Wednesday, August 30, and running through the end of the Fair on Labor Day, admission during Special Fair Days will cost $1 for select guests. These new promotions will provide more visitors an opportunity to enjoy the newly renovated Fairgrounds, helping to drive tourism, which complements the region's economic growth strategy "Central New York Rising."
"Our continued investment has transformed the Great New York State Fair into a world-class entertainment destination, and it continues to get better," Governor Cuomo said. "This year, the Fair is off to a record-setting pace and these promotional days will keep that momentum going - bringing more visitors to Central New York and helping the region continue to rise."
The additional Special Fair Days include:
College Day is Every Day
In recognition of New York State's world-class colleges and universities, the Fair will offer college students $1 admission with a valid school identification beginning Wednesday and running through Labor Day.
You Set the Record Days
In celebration of breaking the all-time-record for daily attendance last Sunday, the Fair will offer $1 admission to all fairgoers on Wednesday and Thursday as a thank you to its loyal visitors.
Speedway at the Fair
Also from Wednesday through Labor Day, visitors can present a ticket stub from the Oswego Speedway or Watkins Glen International Speedway and receive $1 entry to the Fair.
SU and NY Sports Day
On Friday, guests can show their team spirit. Visitors who wear a hat, t-shirt or jersey of their favorite, school, college or professional sports team will receive $1 admission, in honor of the home opening game of the Syracuse University football season.
Onondaga County Executive Joanie Mahoney said, "The Governor's investments have made the Fair bigger and better than ever and record numbers of people are coming! These special days are a way to say "Thank You" to New Yorkers. The Fairgrounds are becoming the economic engine we knew they could be and all of CNY is benefitting. There are still 6 days left to go and we hope everyone will come see how great the 2017 Fair is."
Acting Fair Director Troy Waffner said, "We're excited to offer these new promotional days at the Fair that celebrate the State's great tourism attractions, sports teams and higher educational institutions. The Fair represents the entire State of New York and we're proud to offer these special deals to fairgoers. I encourage everyone to take advantage of the $1 admission that will provide a day's worth of great entertainment and fun."
State Agriculture Commissioner Richard A. Ball said, "Governor Cuomo's plan to revitalize the fairgrounds has brought new energy here and the response has been overwhelming. We are proud to show off the new attractions, exhibits and facilities, and these Special Days are a great way to give more people the opportunity to come experience all the exciting upgrades for themselves."
The $50 million phase one of Governor Cuomo's State Fair revitalization plan resulted in an expanded and more profitable Midway, including a new signature skyride, the Broadway Skyliner, an eye-catching new Main Gate, a new home for the popular and renovated New York State Police exhibit, and the rebuilding of the Turtle Mound in the Indian Village. A $70 million second phase will begin after the Fair, resulting in a 133,000-square foot flexible Exposition Center and major reconstruction of the Fair's largest parking lot.
The renovations debuted at the 2016 Fair to wide acclaim, resulting in record attendance of 1.12 million people and strong positive ratings from Fairgoers for the openness, cleanliness and programming of the renovated Fairgrounds.
Accelerating Central NY Rising
Today's announcement complements "Central NY Rising," the region's comprehensive blueprint to generate robust economic growth and community development. The State has already invested nearly $3 billion in the region since 2012 to lay the groundwork for the plan - capitalizing on global market opportunities, strengthening entrepreneurship and creating an inclusive economy. Today, unemployment is down to the lowest levels since before the Great Recession; personal and corporate income taxes are down; and businesses are choosing places like Syracuse, Oswego and Auburn as a destination to grow and invest in.
Now, the region is accelerating Central NY Rising with a $500 million State investment through the Upstate Revitalization Initiative, announced by Governor Cuomo in December 2015. The State's $500 million investment will incentivize private business to invest well over $2.5 billion - and the region's plan, as submitted, projects up to 5,900 new jobs.
The New York State Fair, operated by the New York State Department of Agriculture and Markets, runs from August 23 to September 4, 2017. The Fair's mission, reflected in its theme, "FIND YOUR GREAT," is to showcase the best of New York agriculture while providing top-quality entertainment.
The home of the Great New York State Fair is a 375-acre exhibit and entertainment complex that operates all year. A year-round schedule of events is available on the Fair's website. Find The Great New York State Fair on Facebook, follow @NYSFair on Twitter, on Snapchat at nysfair and enjoy photos from the Fair at Flickr.com/photos/nysfair. Also, New Yorkers are invited to send their ideas for the Great New York State Fair at statefairideas@agriculture.ny.gov.