David Seth Cohen has found an investor for a tennis comedy - but there's a catch. 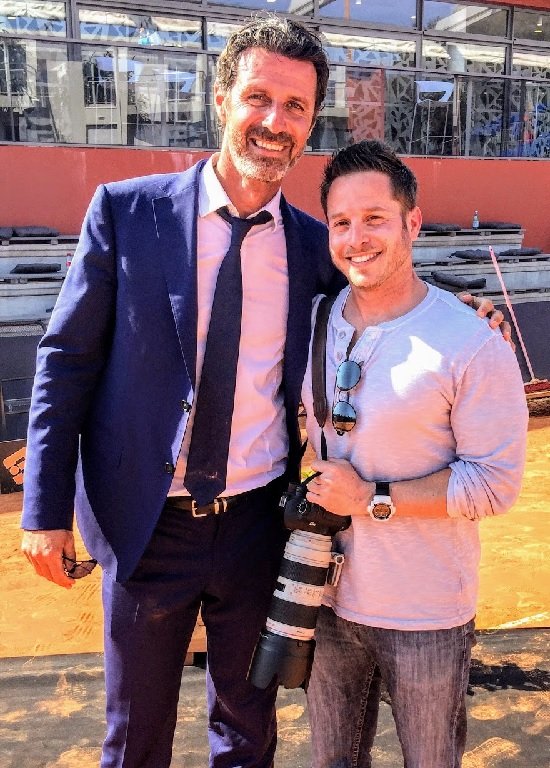 David Seth Cohen and Patrick Mouratoglou, a well known tennis coach who has agreed to play a supporting role in the movie.

It sounds like a TV reality show. An up-and -coming filmmaker meets a multi-millionaire, who gives him $2.5 million to make a movie called The Ballboy, a tennis comedy designed to fit into a long string of sports comedies.

The script has already been written and the coach of one of the world’s greatest tennis players has agreed to play a role in the movie. But there’s a twist – and that’s what makes it feel like a reality show in the making.

The big catch: the filmmaker has to raise another $2.5 million in matching funds - before he can use the first $2.5 million. Far from a reality show, this is a real story and situation for Long Island filmmaker David Seth Cohen.

David Seth Cohen, a writer, filmmaker, videographer and photographer, has got a $2.5 million investment in his sports comedy – but he has to match the money if he’s going to use it to use it to make the film.

Cohen said the money has been deposited in an escrow account for The Ballboy, a film he says he “created because tennis deserves a laugh-out-loud comedy and a box office hit.”

“As per the agreement with our investor, to green-light The Ballboy, we must raise matching funds of $2.5 million iin private equity capital,” Cohen said. “We have until Nov 28, 2019 to do so.”

The Ballboy is a sports comedy, a genre that Adam Sandler and Will Ferrell have spent years helping create, often with blockbuster hits.

Cohen sees tennis as a natural next step when it comes to sports comedies. Plus, there are certain aspects of tennis, from the sport's somewhat stodgy history to its one-on-one rivalries, that in certain ways may actually be crying out for a comedy.

And Cohen has got interest from some in the sport. He said Patrick Mouratoglou, Serena Williams’ coach, is on board to play the role of "Le Champion” and as a supervising producer.

In addition to being Serena Williams’ coach, Mouratoglou is a consultant and TV host for ESPN and FOX Asia as well as the star of The Coach on Eurosport.

Cohen said “once the project is green-lit,” Mouratoglou could discuss cameos and special appearances with his tennis friends and colleagues.

For now, though, Cohen said $2.5 million remains in an escrow account as he looks for ways to bring in additional funding to match that money – and start making this comedy about the game of tennis.

He’s not, however, only focusing on this when it comes to filmmaking. Cohen's finishing up a documentary called Finding Sandler, that's also largely a comedy.

“Finding Sandler is in post-production,” Cohen said. “We hope to finish it by the end of this year and release it next year.”

Then there’s that money sitting in escrow awaiting a Hollywood ending or a reality TV show or just waiting.

And there’s the script, although only time will tell what reality writes next for this story about an effort to make a tennis comedy that, as of now, is a story in itself.