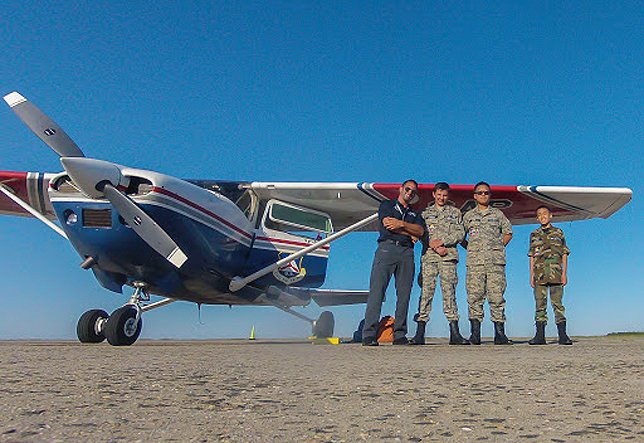 Westhampton Beach, August 28, 2017 - It has been announced that Civil Air Patrol’s 9th Suffolk Cadet Squadron is now offering its members free orientation flights from Westhampton Beach. The announcement completes an effort that had been more than five years in the making.
Prior to selecting Francis S. Gabreski Airport in Westhampton Beach to launch “O-Flights,” cadet members from eastern Long Island were obliged to embark from Long Island MacArthur Airport in Holbrook, amounting to as much as 40 miles of driving. “We can finally eliminate a major hurdle and fly our cadets from our own back yard,” commented Civil Air Patrol Major Frank Zambaras. Zambaras, a resident of Sayville, was able to facilitate the ferrying of aircraft from MacArthur to Gabreski, where the flights are now originating.
Cadet Orientation Flying is a privilege for C.A.P. cadets in order to become involved with aviation theory and practice. Flights are catered to the powered flight syllabus espoused by the C.A.P., contributing to its mission of aerospace education.
Civil Air Patrol., in its Total Force role, operates a fleet of 550 aircraft and performs about 90 percent of continental U.S. inland search and rescue missions as tasked by the Air Force Rescue Coordination Center and is credited by the AFRCC with saving an average of 78 lives annually.
C.A.P.’s 56,000 members nationwide also perform homeland security, disaster relief and drug interdiction missions at the request of federal, state and local agencies. Its members additionally play a leading role in aerospace education and serve as mentors to more than 24,000 young people currently participating in the C.A.P. cadet program.
Performing missions for America for the past 75 years, C.A.P. received the Congressional Gold Medal in 2014 in honor of the heroic efforts of its World War II veterans. C.A.P. also participates in Wreaths Across America, an initiative to remember, honor and teach about the sacrifices of U.S. military veterans. Visit www.capvolunteernow.com for more information.
The 9th Suffolk Cadet Squadron C.A.P. meets Wednesday evenings at the Francis S. Gabreski Air National Guard Base in Westhampton Beach. For more information, please visit their website at www.squadron9.com.