Back By Popular Demand: Judy Carmichael In New Concert At Bay Street Theater

"Can You Love Once More?" Saturday, September 15 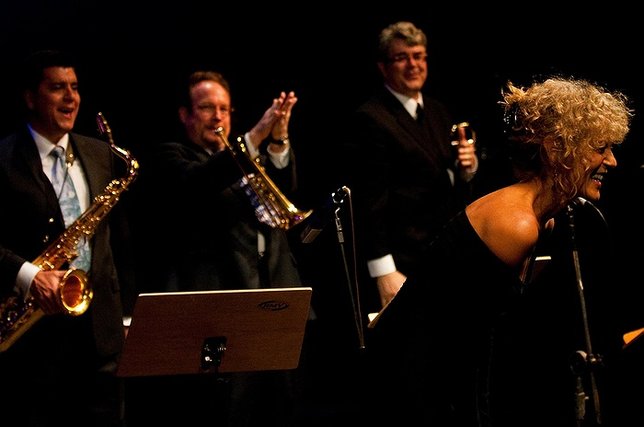 Sag Harbor, NY - August 24, 2018 - Bay Street Theater & Sag Harbor Center for the Arts is pleased to announce Judy Carmichael will return to the Bay Street stage with her new show Can You Love Once More? on Saturday, September 15 at 8 pm. Ticket prices range from $35 - $55 and can be purchased now at baystreet.org or by calling the Box Office at 631-725-9500.
Grammy-nominated pianist, vocalist, and songwriter Judy Carmichael returns with her quartet for an evening of swing piano, sultry vocals and her signature humor to celebrate the American Songbook and selections from her CD of originals: Can You Love Once More?  Judy & Harry play Carmichael & Allen, a collection of hip 21st century standards. Judy and her quartet will feature songs by Hoagy Carmichael, Harold Arlen, Peggy Lee, the Gershwins and other favorites from the classic era of songwriting.
Judy Carmichael appears frequently on radio and TV throughout the world and maintains a busy international touring schedule.  She is popular with both jazz and cabaret audiences with her soulful, swinging interpretations of the Great American Songbook, and equally impressive hilarious, improvisational anecdotes.  Her wit and musical knowledge come together on her weekly NPR radio broadcast/podcast Judy Carmichael’s Jazz Inspired, now in its 18th year, where she talks with celebrated creative artists about their love for jazz and how it inspires them, everyone from Seth MacFarlane and Robert Redford to Tony Bennett and Billy Joel.
Judy Carmichael has played the major international concert halls and festivals from Carnegie Hall to the Peggy Guggenheim Museum in Venice (the first concert ever presented by the museum) to programs with Michael Feinstein, Melissa Etheridge, Leslie Garrett, Joel Grey, Jools Holland, Steve Ross and the Smothers Brothers.  In addition, Ms. Carmichael has done comic skits and performed her music on radio and TV and has been featured on Entertainment Tonight, CBS Sunday Morning, NPR’s Morning Editions, A Prairie Home Company, as well as numerous shows for the Australia Broadcast Corporation and the BBC. Additionally, she has performed private recitals for Rod Stewart, Robert Redford, President Clinton, Gianni Agnelli and Cameron Macintosh.  Judy Carmichael’s memoir, Swinger!  A Jazz Girl’s Adventures From Hollywood To Harlem was published this year.
Her recordings, music books and memoir are available at www.judycarmichael.com and iTunes. Judy Carmichael’s Jazz Inspired podcasts on iTunes or streamed from www.jazzinspired.com.
Bay Street Theater & Sag Harbor Center for the Arts is a year-round, not-for-profit professional theater and community cultural center which endeavors to innovate, educate, and entertain a diverse community through the practice of the performing arts. We serve as a social and cultural gathering place, an educational resource, and a home for a community of artists.