Celestial Seasonings is partnering with get-out-the-vote group HeadCount on a Grateful Dead tribute tea available online and at some concerts. 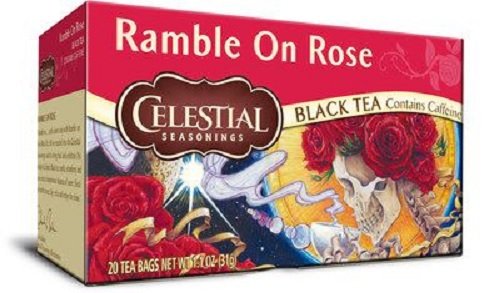 Photo by: Headcount and Hain Celestial

In an era where tribute bands fill Long Island clubs, Long Island-based Hain Celestial is getting into the act with a Grateful Dead band tribute tea.

Don't rush out to the supermarket to scan the shelves for this blend named for a Grateful Dead song: It's being made available exclusively online free and at some concerts through a partnership with a get-out-the-vote organization.

In partnership with nonprofit HeadCount, this exclusive blend mixing vanilla, strawberry and rose will be available online free. The group says it has already registered more than 600,000 votters - and counting.

“Ramble on Rose Black tea will transport your taste buds to 1972, the year the song 'Ramble on Rose' was brought to life for the world's listening pleasure,” according to the two companies.

To get a free box of this tribute tea, register to vote or sign up for election alerts online through HeadCount, a nonprofit organization that promotes participation in elections through music.

Ramble on Rose, a classic Grateful Dead song, has lyrics about "Ramblin' Rose" and a song that will never end.

"Did you say your name was Ramblin' Rose? Ramble on, baby. Settle down easy. Ramble on, Rose," the song goes. "I'm gonna sing you a hundred versus in ragtime. I know this song, it ain't never gonna end."

This isn’t the first Grateful Dead tribute product. Ben & Jerry, for instance, released Cherry Garcia, which has managed to become a classic.

Tea or Grateful Dead fans (if they are so disposed) can get a fee box online at CelestialSeasonings.com/RambleonRose as well “while supplies last,” according to the companies.

“Celestial Seasonings developed the perfect blend to honor our mission and connection to an iconic band," Andy Bernstein, executive director at HeadCount, said in a written statement.

Celestial Seasonings, which turns 50 this year, has a wide range of teas ranging from Red Zinger and Sleepytime, although those names have no connection to music.

Ramble on Rose, the tea and not just the tune, does have its roots in the Grateful Dead: the box was designed by Grateful Dead poster artist A.J. Masthay.

"Since our beginnings in 1969, music has been part of our brand's DNA,”Tim Collins, Celestial Seasonings vice president of marketing, said in a written statement, “and we're excited to bring Ramble on Rose to the Grateful Dead's biggest fans.”

In addition to online, Ramble on Rose will also be given away at the LOCKN' Festival beginning Aug. 22 at the Oak Ridge Farm in Arlington, Virginia.

Celestial Seasonings also is giving away two four-day tickets to LOCKN' through its social channels. More info. at @CelestialTea on Instagram and at  Facebook.com/CelestialSeasonings.