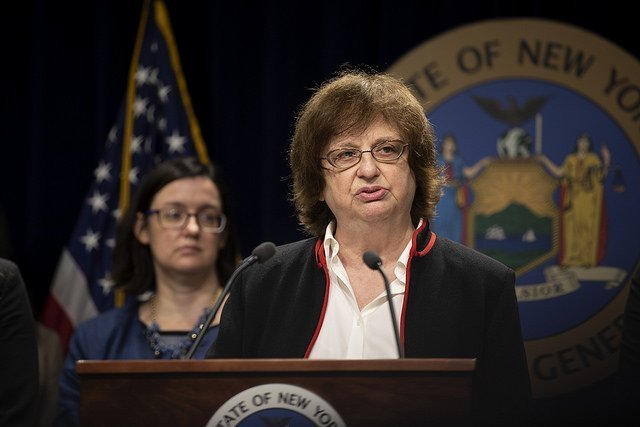 New York, NY - August 21, 2018 - Today, New York Attorney General Barbara D. Underwood led a new brief in her lawsuit to block the Federal Communications Commission’s rollback of net neutrality, urging the U.S. Court of Appeals for the D.C. Circuit to vacate and reverse the FCC’s order. Attorney General Underwood leads a coalition of 23 Attorneys General in the lawsuit, which filed earlier this year.
“A free and open internet is critical to New York – and to our democracy. By repealing net neutrality, the FCC is allowing internet service providers to put their profits before consumers while controlling what we see, do, and say online,” said Attorney General Underwood. “As we detail in our brief filed today, the rollback of net neutrality will have a devastating impact on millions of New Yorkers and Americans across the country, putting them at risk of abusive practices while undermining state and local regulation of the broadband industry. We’ll continue to fight to protect consumers’ right to a free and open internet.”
The Attorneys General partnered with other government petitioners – the County of Santa Clara, Santa Clara County Central Fire Protection District, and the California Public Utilities Commission – in this brief. The non-government petitioners submitted a separate companion brief today; the government petitioners also join the arguments made by the non-government petitioners in that brief.
The coalition of 23 Attorneys General collectively represents over 165 million people – approximately 50 percent of the U.S. population – and includes the Attorneys General of New York, California, Connecticut, Delaware, Hawaii, Illinois, Iowa, Kentucky, Maine, Maryland, Massachusetts, Minnesota, Mississippi, New Mexico, New Jersey, North Carolina, Oregon, Pennsylvania, Rhode Island, Vermont, Virginia, Washington, and the District of Columbia.
The government petitioners’ brief focuses on two critical issues: first, that the FCC’s order is arbitrary and capricious because it puts consumers at risk of abusive practices by broadband providers, jeopardizes public safety, and more; and second, that the FCC’s order unlawfully purports to preempt state and local regulation of broadband service.
“For more than fifteen years, the Federal Communications Commission has agreed that an open Internet free from blocking, throttling, or other interference by service providers is critical to ensure that all Americans have access to the advanced telecommunications services that have become essential for daily life. The recent Order represents a dramatic and unjustified departure from this long-standing commitment,” the brief states.