The men were two miles northeast from where they had launched and had been in the water for approximately a half an hour, cops say. 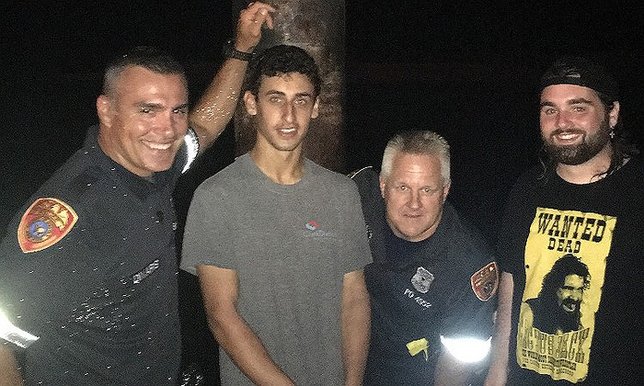 Nissequogue, NY - August 20, 2018 - Suffolk County Police Marine Bureau officers rescued two men after their canoe overturned in the Long Island Sound off of Short Beach in Nissequogue on Friday, August 17, 2018.
Suffolk County Police received a 911 call at 8:53 p.m. from Cortland Terris who reported that the canoe he was on with a friend had overturned. Before the canoe overturned, Terris and Michael Small had been drifting northeast in the canoe for approximately one and a half to two hours. The men attempted to paddle back to shore but were unsuccessful because of heavy winds and rough seas. Terris called 911 after their canoe overturned.
Emergency Complaint Operator Kim Swan obtained the victim’s latitude and longitude position and communicated their location to Marine Bureau officers Nick Divaris and Pete Bogachunas who responded in Marine Bravo. The officers located the men, who were holding on to the overturned canoe and a cooler, after Terris, who had significantly low battery power, pointed his cellphone flashlight towards the officer’s vessel. The men were two miles northeast from where they had launched and had been in the water for approximately a half an hour before officers rescued them and brought them aboard Marine Bravo.
Officers transported Terris and Small, along with their canoe, to the Kings Park boat ramp. Terris, 22, of Smithtown and Michael Small, 21, also of Smithtown, refused medical attention.