Acting Nassau County District Attorney Madeline Singas announced that the owner of an Old Westbury farm has been arrested and charged with the failure to provide proper sustenance and medical care to 25 animals, including ... 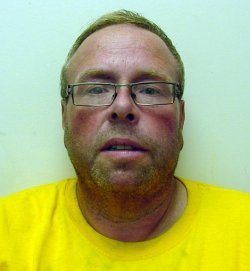 Old Westbury, NY - August 18, 2015 - Acting Nassau County District Attorney Madeline Singas announced that the owner of an Old Westbury farm has been arrested and charged with the failure to provide proper sustenance and medical care to 25 animals, including horses, donkeys and goats.

Michael Dombek, 54, was arrested by DA Investigators today and charged with 25 counts of Failure to Provide Proper Sustenance, an A misdemeanor animal neglect charge.  Nassau County District Court Judge James Darcy released Dombek on his own recognizance and ordered him back to court on Sept.4. Judge Darcy granted prosecutors’ request to impound the animals in place under the close supervision and monitoring of law enforcement. Dombek faces a maximum sentence of one year in jail if convicted of the top charge.

“Our investigators found these defenseless animals with ribs showing from malnutrition, infected hooves from filthy living conditions, and water covered in slime,” Acting DA Singas said. “Thankfully, with the help of the Nassau County SPCA, veterinarians, and our Animal Crimes Unit, they will get the care they need, and this defendant will be held accountable for this outrageous neglect.”

Acting DA Singas said that after receiving complaints from the public, DA Investigators made several site visits to monitor conditions at Dombek’s Old Westbury farm, including a surprise visit today in which access was granted by the defendant. Accompanied by an expert equine vet, DA Investigators today found 25 animals – seven horses, three donkeys, eight goats, one sheep, two geese, two rabbits and two dogs – in various states of poor health and hygiene and in poor and unsafe living conditions.

Following evaluation by a veterinarian, five of the 25 animals impounded by the DA’s Office have been removed from the property for specialized medical care. The facility is being cleaned, and the remaining animals are receiving care under the supervision of the court-ordered monitor, an equine expert from the Nassau County Society to Prevent Cruelty to Animals. The DA’s Office also arranged for an emergency delivery of food and other supplies to stabilize the remaining animals. The shelter and care for all the animals are being paid for at no taxpayer expense, using DA criminal asset forfeiture funds.

Bob Sowers, a spokesman for the Nassau County SPCA, said: “Today is a day long in coming. I applaud the efforts of the District Attorney's office and am extremely pleased that we will closely monitor the care of the remaining animals.”

Earlier this year, Acting DA Singas made a pledge to use criminal asset forfeiture funds – the monetary proceeds derived from criminal cases – to relieve taxpayers and local shelters of the cost of the medical care, boarding, rehabilitation and rehoming of any animal seized by law enforcement in connection with animal cruelty prosecutions.

The public should always call 911 in cases of active emergencies or imminent danger.