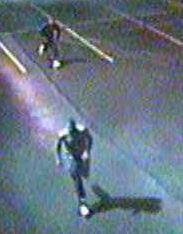 Car Broken into Outside Melville Gym
The Suffolk County Police Department is looking for two men who broke into and stole from a vehicle parked outside of a Planet Fitness gym in Melville.

According to the SCPD, the two unidentified men (pictured right) smashed the passenger side window of a 2011 Chevrolet Camaro on July 3, 2014, then raided the car for contents including a Samsung smartphone, cash, and a New Jersey driver’s license. The subjects then fled to the back parking lot and exited the area in what appeared to be a gray Mercedes SUV (pictured below).

Suffolk County Crime Stoppers is offering a reward of up to $5,000 for information that leads to an arrest of the two subjects. Anyone with information is encouraged to call 1-800-220-TIPS.

Detectives stated that the 37-year-old male driver picked up Patricia Wright, 25, of Melville, on Third Avenue.  After a short distance, Wright allegedly snatched money from the driver’s hand and a brief struggle ensued before the drive stopped his vehicle on Hopper Street.

Patricia Wright fled on foot through a backyard, but was located by Third Precinct Officers on Wright Street, where she was taken into custody without incident.

Patricia Wright has been charged the Robbery in the Third Degree and will be arraigned in Hempstead’s First District Court today.