Three people went into the water near a dock and had to fight a strong current to stay afloat. 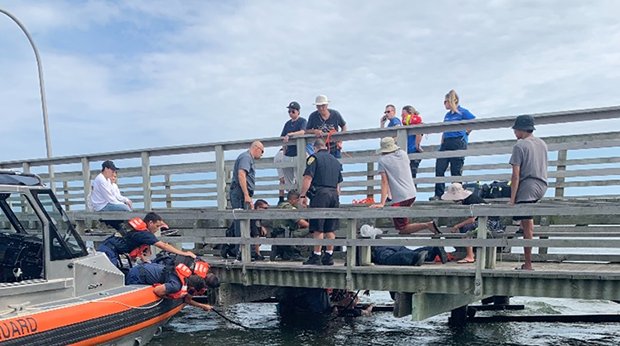 On Monday afternoon, three kayakers capsized in Captree State Park in Bay Shore and had to be rescued by Suffolk County Police Marine Bureau officers.

A 55-year-old Farmingville man was kayaking when his vessel capsized. Two family members, a man and a woman, both from North Babylon, tried to help when their own kayaks also overturned.

All three clung to pilings under a nearby dock as someone on shore called 911. Suffolk County Marine Bureau Police and New York State Park Police officers, as well as the United States Coast Guard, arrived on scene.

Marine Bureau Officer Chris Maggio went into the water to assist the 57-year-old woman from North Babylon out from under the dock. The pair swam with the current until they were able to safely pull themselves onto a Suffolk County Police Marine vessel.

The Farmingville man, with the assistance of law enforcement officers and good Samaritans on the dock, was able to climb to safety.

All three kayakers were evaluated on scene by Islip Rescue and declined further medical treatment.