Record Number of Endangered Piping Plover Pairs and Fledges This Year Thanks to Enhanced County Efforts. 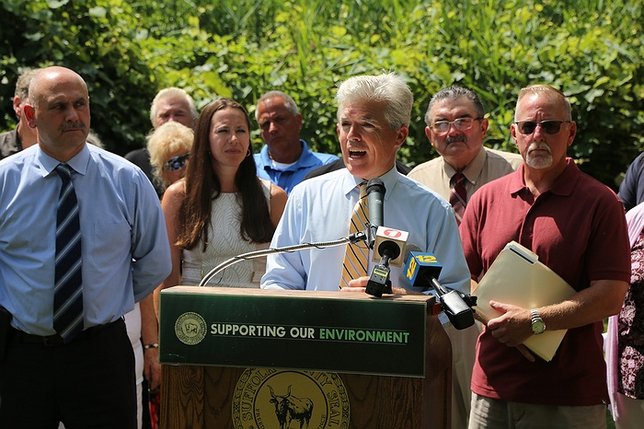 Suffolk County, NY - August 17, 2018 - Suffolk County Executive Steve Bellone today announced that the County’s 2018 Piping Plover Conservation Program has resulted in a record number of successful piping plover pairs and fledges this summer while retaining recreational opportunities for outer beach enthusiasts at Smith Point County Park.
In prior years, a vast majority of the outer beach area at Smith Point County Park was closed for public access to protect the plover breeding grounds. Realizing the importance of enhancing public access to the popular outer beach, the Department of Parks and Recreation updated its Endangered Species Protection Program with the goal of complying with federal conservation laws while fostering greater public access to the outer beach.
“Through careful planning and enhanced monitoring of the federally-protected plover, we were able to strike a balance to protect the plover while enhancing access to the outer beach for our four-wheel drive enthusiasts,” said County Executive Steve Bellone. “I would like to commend all those involved in the protection efforts and also the general public for their cooperation and understanding.”
When first launched in 1997, the Endangered Species Protection Program resulted in 32 pairs of plovers producing 28 fledges. This year’s numbers produced 62 pairs with 100 fledges, the highest number of fledges in the program’s history. Now that the fledglings are grown, the outer beach has been returned to full access to the public and four-wheel drive beach vehicle enthusiasts.
Plover Facts
Once chicks become mobile, the need to protect becomes a greater challenge for the stewards and partial beach closures are necessary. However, with careful daily monitoring, the closures are lifted whenever possible to accommodate greater public access.
The implementation of protective measures such as installing string fencing, barricades and predator enclosures, careful monitoring and Park Ranger enforcement of restricted areas enable the fledging process to progress naturally and undeterred. The loss a nest due to human or predator intervention may result in the plover pairs re-nesting thus re-starting the nest-to-fledge cycle.
Phil Berdolt, Commissioner of the Suffolk County Parks Department said “One goal of the program is to ensure the first nest is successful and not disturbed. This will result in our beaches opening sooner for full public access. If the plovers need to re-nest, the process is delayed and partial beach closures extended.”