Dr. Mary Carlson, DPM was honored by The Assembly of the State of New York’s 17th district with their “Women of Distinction’ award. 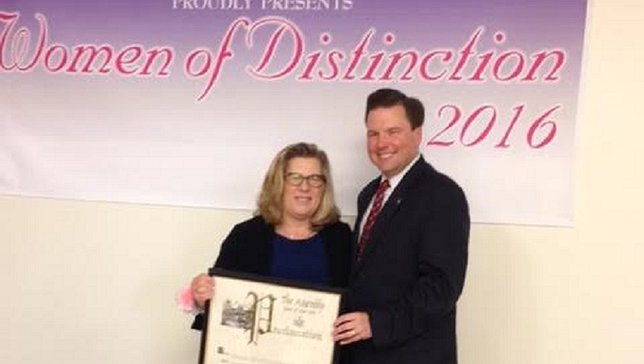 Photo by: Shoes For All.

Farmingdale, NY - August 16, 2016 - On Saturday August 13, 2016 Dr. Mary Carlson, DPM was honored by The Assembly of the State of New York’s 17th district with their “Women of Distinction’ award. This award was given to Dr. Carlson among others, by assembly member Thomas McKevitt of the 17th district.

In a letter by Mr. McKevitt to Dr. Carlson, he writes: “This award allows me to pay tribute to the extraordinary efforts made by women like you who make our community a better place to live."

Dr. Mary Carlson is a podiatrist in Williston Park and also the founder of Shoes For All, a not-for-profit organization that collects new and gently worn shoes to be donated to those in the community who are in need.

Upon receiving her award, Dr. Carlson said, “...I am honored to accept this award on behalf of our organization, its volunteers, and all who have donated to help those in need. Without their support, none of this would be possible."

The Women of Distinction awards ceremony was held on August 13th 2016 at the Farmingdale Public Library.

More Information about Shoes For All can be found at: www.ShoesForAll-SFA.com.