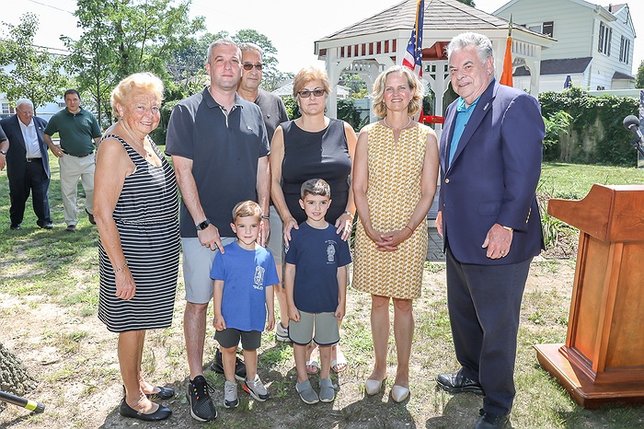 Nassau County Executive Laura Curran was joined by the family of a local Eagle Scout, Cory Levy and the family of slain ATF agent John Capano for a ribbon cutting ceremony for the reconstructed John Capano Memorial Gazebo at Washington Avenue Park in Seaford.
One year ago last week, Tropical Storm Isaias swept up the East Coast causing millions of dollars’ worth of property damage, including the destruction of this memorial gazebo. The gazebo was originally built in 2014 by then 15-year Boy Scout Cory Levy to memorialize the tragic death of Capano, the slain federal agent from Seaford. With the help of the community, outside groups and Nassau County, the gazebo was rebuilt.
“It was important to us to rebuild this memorial gazebo after it was destroyed by Tropical Storm Isaias. Important to not only help preserve the memory of John, but to send a clear message that Nassau County does not and will not forget those who put themselves in harm’s way to protect our community,” said Nassau County Executive Laura Curran. “We will always rebuild, and we will always come back stronger than before. I want to thank the Nassau County Parks Department for overseeing the reconstruction, along with the Long Island Board of Realtors, who generously helped fund this project.”
“Long Island Board of REALTORS® is honored to be a part of the reconstruction of the Seaford Memorial Gazebo, to ensure that slain federal agent John Capano's sacrifice is not forgotten, and to restore the efforts and hard work by Eagle Scout Cory Levy,” said LIBOR President Susan Helsinger. “As REALTORS®, it is our livelihood to support and assist in making our communities a better place to live, work and play.”
John Capano, who grew up in Seaford, died while attempting to stop a robbery at a local pharmacy on December 31, 2011. John, a veteran AFT agent, thwarted the robbery, but was caught in a friendly fire incident by a retired police officer who was next door at the time and responded to the scene when he was notified.
This memorial is intended to serve as a reminder of John’s heroism in protecting his beloved neighborhood and fellow residents.